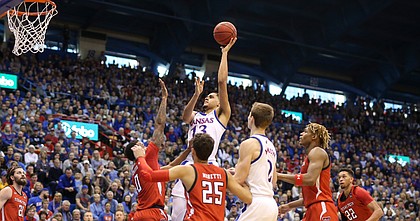 Kansas basketball coach Bill Self has a simple way of sorting out the crowded house that exists in KU’s backcourt heading into the offseason.

“The way we should look at it is to say they’re all guards,” Self told the Journal-World during a recent phone interview.

In all, Kansas is slated to have nine perimeter players on scholarship heading into the 2020-21 season.

From senior-to-be Marcus Garrett and redshirt freshman point guard Dajuan Harris to sophomore-to-be Tristan Enaruna and back-from-injury freshman Jalen Wilson, the Jayhawks will have a wide range of styles and sizes in their backcourt next season. 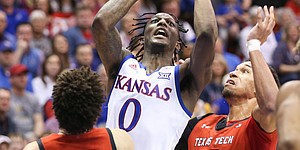 Add to that group the returning experience and versatility of Ochai Agbaji and Christian Braun and the elite potential of newcomers Bryce Thompson and Tyon Grant-Foster and you’re looking at a deep group.

“Just with those guards, you’re going to have some serious competition in the backcourt,” Self said, noting that incoming freshman Latrell Jossell also would provide depth.

Thompson, a five-star prospect from Tulsa, Okla., comes to KU as one of the top players in the 2020 recruiting class.

Ranked No. 19 nationally, the 6-foot-5, 175-pound scorer comes to KU on the heels of a prep career rooted in versatility.

“He’s a lead guard and scoring guard,” Self said of Thompson when he signed last November. “We’ve had some of our best success with these type of combo guards. He’s going to bring energy to our program, and he’s going to bring talent. We anticipate him being an impact player for us.”

And then there’s Grant-Foster, the No. 1-ranked juco player in the nation by some outlets, who Self recently said “may be as talented of a player as we have.”

While Self has preferred to put versatility on the floor whenever possible throughout his coaching career, it’s not like he’ll enter the 2020-21 season with the idea of playing four point guards or five slashers at the same time.

Instead, Self said the Jayhawks will field a backcourt attack that features versatility on offense and a clear identity on defense. 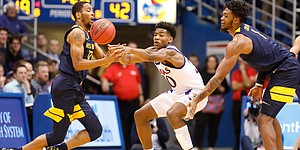 “Who they guard will probably determine what they are more so than where they play on offense,” Self said of sorting out specific positions on the floor. “Because they’ll all be interchangeable on offense.”

As explosive as the 2020-21 Jayhawks could be on offense — Self said he hoped KU’s offense would be able to utilize many different styles and combinations — Self appears to be most looking forward to what the glut of guards means for the team’s defense.

“Marcus and Dajuan will be the two best sets of hands we’ve had on our team maybe since Mario (Chalmers) and Russell (Robinson),” Self said. “I think we need to take advantage of that.”

To do so, Self said he envisioned next season’s squad pressuring full court and playing “a really fun style” in half-court settings that demands more from defenders than just keeping their man in front of them.

It’s KU’s backcourt depth that will make that possible. And after a few years of seeing his top guards play 30-35 minutes per game or more, Self seems prepared to utilize more bodies and different styles during the 2020-21 season.

“We only had seven guys playing the lion’s share of the minutes this year,” Self said. “Next year, I just don’t see this being a team where you can do that.”

Marcus and Dajuan the best since 2008? What was Marcus and Dotson last year, chop liver?

That should tell you all you need to know about how they feel about Dajuan. He's nowhere near the same offensive player as Dotson. And, really, they're pretty different players overall. But Dajuan will have a big role next year (and beyond) and there is no shortage of people out there who believe he'll be ready for it.

Self did not say the 2 best. (Mason and Graham?)

Self did say the 2 best set of hands. In context, I took that to be a reference to steals and deflections on defense, though Dit and Marcus became pretty crazy good at that last year too.