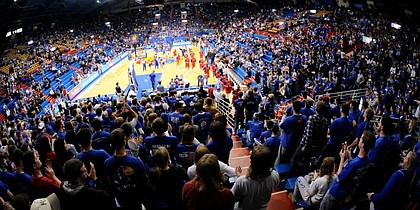 Season tickets for nearly 45% of the seats at men’s basketball games at Allen Fieldhouse will cost less under a new pricing model that starts next season.

The change, announced by Kansas Athletics on Tuesday morning, will mark the first time since the 2008-09 season that KU has lowered the price of its season tickets. It comes with an option for fans to secure a season ticket for $475 less than the cheapest package from last season.

For at least the 2020-21 season, the fieldhouse's seating options will be divided into eight tiers, each one with a different price point. Previously, there were only three tiers.

To purchase season tickets, fans are also required to make at least a $100 donation to the Williams Education Fund, which raises money for scholarships for student-athletes, according to KU's website.

In a news release, KU said the new model was developed because “feedback from fans as well as market research has shown that the price and seat location value from the past few seasons have not been aligned.”

KU also said the move was a direct response to the financial hardships brought about by the COVID-19 pandemic.

“We know many of our fans will be struggling when we emerge from this pandemic,” KU Athletic Director Jeff Long said in the release. “And we needed to create a more affordable experience or we could risk losing the incredible home court advantage that has made Allen Fieldhouse the best college basketball venue for decades.” 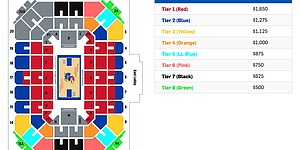 A look at the new season-ticket pricing options for Kansas men's basketball games at Allen ...

In addition to offering new prices, the six lower tiers also are priced closer together than in the past. Last season, the smallest gap between tiers was $300, between tiers 2 and 3. With the exception of the gap between tiers 1 and 2, none of the gaps between adjacent tiers in the new model is larger than $150.

“It is unfortunate to see how this pandemic has hit so many, so hard, but hopefully the addition of tiers and lower ticket prices will allow our fans to enjoy Kansas basketball together again soon,” KU coach Bill Self said in the release.

Added Long: “Our priority is to keep Allen Fieldhouse as the best homecourt advantage, and we cannot do that without our fans.”

Williams Fund donations and ticket orders are due by June 30. Those who purchase tickets for the upcoming season will be able to choose their seats on July 13.

I’d be sure to get the refund policy in writing before cutting a check.

How much of this has to do with the looming possibility that much of the season is cancelled due to the pandemic? Or at least greatly altered in terms of attendance? I know I'd be hesitant to buy tickets if I knew there was a decent chance games might get cancelled.

...or the games may not count toward an NCAA appearance because we won't be allowed to be there.

Demand is not so high these days!

Demand for just about everything is down these days. There was even TP in the store this past weekend.