Azubuike, Self receive votes for AP player, coach of the year 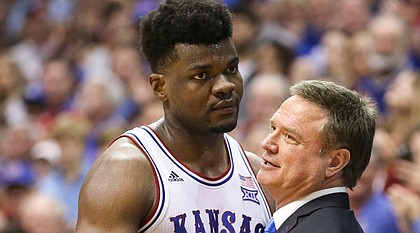 But a couple of Jayhawks factored into the voting by the 65-person panel, as well.

Kansas big man Udoka Azubuike received two votes for AP Player of the Year and Kansas coach Bill Self picked up one vote for AP Coach of the Year.

Topppin received 34 votes while Iowa’s Luka Garza was next with 24 votes. Marquette’s Markus Howard (3), Azubuike (2) and Oregon’s Payton Pritchard (2) rounded out the voting.

Leonard Hamilton, of Florida State (6), Gonzaga’s Mark Few (2) and Rutgers coach Steve Pikiell (1) joined Self in rounding out the voting.

“Our team is very appreciative of what we accomplished,” Toppin told the AP, “just because we made history at our school."

Dayton (29-2) went from being picked to finish third in the Atlantic 10 to No. 3 in the final Top 25 poll, matching the program’s best poll finish in school history.

The Flyers went unbeaten in league play and in road games, leaving them positioned to claim a No. 1 seed in the NCAA Tournament that was canceled amid concerns about the coronavirus pandemic.

Toppin averaged 20 points and 7.5 rebounds while shooting 63% from the field and 39% from 3-point range, leading a season-long surge by the Flyers that rallied a community shaken by devastating tornadoes and a deadly mass shooting in the past year.

Dayton grabbed national attention early, taking Kansas to overtime in a loss in the Maui Invitational championship game. The Flyers' only other loss came in December on a buzzer-beating 3-pointer in overtime against Colorado. The Flyers had won 20 straight games when the season ended.

“Honestly, if you had asked me, I swear we could’ve won a national championship and our team was so ready to play in the tournament,” Toppin said. “We were so locked in. But because of this virus, things happened. It’s just going to be a what-if for the rest of our lives, but it’s something we’re going to have to live with.”

Now Dayton has its first winners of the AP’s top awards, joining St. Joseph’s in 2004 (with Jameer Nelson and coach Phil Martelli) as the only programs in the past 40 seasons to claim both in the same year.

“In the 31 games that we played, our guys did a heck of a job of playing consistent and taking advantage of the opportunities that were in front of us,” Grant said. “What we did accomplish in the shortened season is something I think that hopefully will be remembered.”

Still loses the conference by 2 games.

This man knows how to screw up his own success.

Who's the coach who beat the top 2 vote getters........ Bill Self, but he'll never get another coach of the year award because it's just expected. I'd say that the coaching job he did with this years team might be better than almost any other year I can remember. Considering all the black clouds, injuries and suspensions we had and still be unanimous #1 in the country is all the proof I need that we've got the best coach in the country!

You nailed it. It's more of an award of "who did better than we expected." People just expect great things from KU and company. That and with the NCAA allegations, I think the AP is hesitant to pick KU. March sadness continues...

One of the things working against Kansas players is that they are not the only star on the team. When you are THE star, you get most of the points, most of the rebounds, most of the assists, etc., and so you stand out. When you have a high quality team with numerous weapons, both offense and defense, the numbers are more evenly spread out and one individual doesn't shine as much as they would otherwise.

get the player he was great. but dont think the coach should won. i know they can't really control their SOS but how many games did they when where the spread was close or they were not favored?