Gary Woodland shoots even par in Round 1 of Travelers Championship 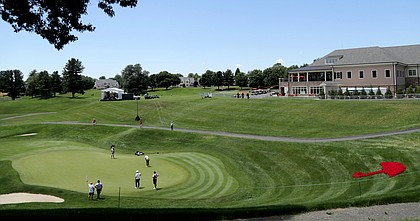 After opening with three birdies on the front nine during the first round of the Travelers Championship on Thursday in Connecticut, former Kansas golf standout Gary Woodland struggled to get home.

Woodland shot a 3-over par 38 on the back nine, which included a double bogey on the par-5 13th hole, and wound up even for the day and in a tie for 107th place.

As he has done so often since the PGA Tour returned to a full schedule following the sport’s shutdown in the wake of the pandemic, Woodland started hot. He birdied the first hole, added another birdie at No. 4 and was 3-under by the time he stepped onto the tee box at No. 7.

Woodland, who finished 9th at the Charles Schwab Challenge, golf’s first evident since restarting, and 62nd last week in South Carolina, tried to rally to save his round with a birdie on the par-3 16th.

The up-and-down round left Woodland 10 strokes behind the leader, Canada’s Mackenzie Hughes, who shot 60 with 10 birdies and eight pars.

Three golfers enter Friday’s second round three shots off the lead and six more sit four strokes back at 6-under.

Kizzire shot 4-under on Thursday and enters Round 2 in a tie for 17th and Niemann shot 2-under and is tied for 58th.