Kansas Day belonged to the Wildcats.

In a clash of Sunflower State rivals at Allen Fieldhouse on Wednesday night, it was the Kansas State women’s basketball team that came away with a 69-61 victory over Kansas on the 159th anniversary of the state’s admission to the Union in 1861.

Three K-State players reached double figures in scoring and the Jayhawks shot just 33.3% for the game in their third consecutive loss.

"We just drove it into traffic entirely too much," KU coach Brandon Schneider said after the loss while explaining his team's rough shooting night. "And (we) didn't find the open man." 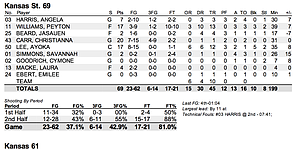 After the two teams played within arm’s reach of one another for most of the first three quarters, K-State twice built a seven-point lead midway through the fourth and posted their largest lead of 11 points in the game’s final 30 seconds.

The run to give the Wildcats some separation featured three KSU free throws and K-State shot 17-of-21 from the free throw line for the game compared to 6-of-11 for KU.

The Jayhawks (12-7 overall, 1-7 Big 12) recovered and trimmed the Kansas State lead to three in the final four minutes, but never drew closer en route to their seventh loss in eight tries since the start of Big 12 Conference play.

Holly Kersgieter, who made the first start of her KU career on Wednesday, had a shot to pull the Jayhawks within three again with just over a minute to play. But her shot in the paint was blocked and led immediately to a layup by K-State’s Ayoka Lee (17 points, 12 rebounds) on the other end to push the KSU lead back to seven and squash KU’s hopes.

After the loss, Schneider said his decision to start Kersgieter was based on a number of things.

"Holly's been playing really well," he said. "I think a lot of it has to do with we need to get Tina Stephens more minutes, so (we're) changing up the rotation a little bit. And (we're) also trying to help (freshman guard) Brooklyn (Mitchell) get out of a little bit of a slump, give her the opportunity to really get engaged, mentally, in the game prior to checking in."

"I thought the real difference in the game was our decision making offensively," Schneider said. "I thought we were aggressive, I just think that we have very young guards who get the ball to certain spots and tonight just didn't have the awareness that they had drawn a lot of traffic."

Kersgieter led the Jayhawks with 7 points in the first half and Zakiyah Franklin tallied 5 despite shooting just 2-for-9 from the floor.

Franklin and Kersgieter led the Jayhawks with 15 and 11 points, respectively. Aniya Thomas led KU's efforts on the boards with a career-high 10 rebounds.

The Jayhawks return to action at noon Sunday, when Oklahoma comes to town for a Super Bowl Sunday showdown at Allen Fieldhouse.

After that, Schneider’s team will play four of its next six games on the road.

The system is in need of repair.

This story is getting old. Its time to move on to a proven Division One winner although I'm not sure you could have enough money to convince someone to take over this sad sack program.

When they did the last round of hiring, it seems like, for about a week, LJW ran an article a day reviewing different candidates that either did interview or they were promoting. I don't recall the specifics there.

What I do remember is thinking for most of the candidates, "sounds great hire that person" on all but the guy they ended up hiring. When they hired this guy, I thought "what the he##? The other candidates were clearly so much better, why that guy?

However many years later, I am still 100%, completely unimpressed with this guy. I don't care if you can beat UMKC and Sisters of the Deaf & Blind. Win some Big XII games. Go to the NCAA tournament. Have a winning Big XII record.

This is ridiculous. Fire him and move on.