Bill Self: Punishments for rivalry game brawl not completely resolved

Roughly 14 hours after players from the Kansas and Kansas State basketball teams brawled in the south end of Allen Fieldhouse, KU coach Bill Self did not yet have an update Wednesday morning on the coming “consequences” that will be doled out in the wake of the confrontation.

“It’s only 10 a.m., and we’re still in the process of communicating with the league office and everything else,” Self said, before adding there will be “penalties” for KU players involved, regardless of the Big 12’s ruling.

“I’m not at liberty, nor do I know at this particular moment,” Self said during his slot on the previously scheduled Big 12 teleconference, “what will be appropriate at this time, because we're still in the process of discussing.”

Just before noon, Self announced KU had suspended Silvio De Sousa indefinitely, pending the final outcome of the university's and Big 12's review of the incident.

Self said he and KU officials watched various videos of the fracas that marred the Jayhawks’ 81-60 win in the Sunflower Showdown. 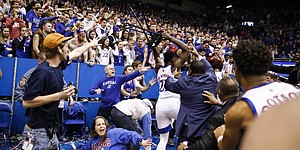 “Everybody has reviewed all angles that you could possibly have, you know, much more than what probably the general public has,” Self said. “And there will be consequences, as I stated. We're still in the process of communicating with league office officials and everything else.”

One video that surfaced on social media late Tuesday night shows much of how the altercation escalated, after De Sousa blocked DaJuan Gordon’s layup attempt and stood over the K-State guard in the game’s final seconds.

The footage recorded from the student section on the south end of the fieldhouse by Cameron Collins shows De Sousa being shoved to the floor by K-State’s Antonio Gordon. De Sousa responded by coming up swinging in the direction of the Wildcats’ David Sloan. It was then that De Sousa and James Love began engaging in a fight, and players and coaches from both programs descended upon the melee.

Asked the morning after the rough scene what he thought about how it all transpired, Self said his opinion on the hows and whys of it didn’t matter.

“We’ll accept responsibility for the role in which we played and obviously, we did play a role. I'm not saying that K-State was innocent in this by any stretch but I am saying I'm only going to comment on on our situation,” Self went on. “I’m not saying they're guilty. I'm just saying I want to comment on our situation, and what I can potentially have influence on, and that would be the actions of our guys. Regardless of what has transpired, always having discipline and keeping a cool head and being responsible and being unselfish. And certainly that did not occur (Tuesday) night within our group.”

KU’s coach reiterated he didn’t want to comment on any actions of K-State’s players.

“People saw, and it's very obvious what took place, and I think that you had a situation that that escalated because of emotions getting the best of the situation,” he said.

Self said Tuesday night he expected to announce punishments for KU players involved on Wednesday.

K-State head coach Bruce Weber didn’t have many concrete updates on the aftermath of the brawl, as of Wednesday morning, when it was his turn to field questions on the teleconference.

Weber began by reiterating he was “very, very saddened” by the incident.

“Obviously there's many people to blame, and I'm the head of our program. So it falls back on me that the incident occurred. It's a shame. It shouldn't have happened,” Weber said.

“As far as punishment goes, right now the league office is reviewing all their video,” Weber added. “They will make decisions on suspensions, with the coordination with our administration and our staff and I would expect that would be sooner than later. Again, it's just sad and disappointing.”

Generally, Weber said, K-State’s coaching staff at various points of a season addresses with players the need for them to keep their cool and not leave the bench.

“Yeah, I mean we talk about it. Curtis Shaw, (Big 12) head of officials, comes and visits at the start of the season with our players, talks to them. We talk about sportsmanship,” Weber said.

In other situations, K-State’s coach said, the Wildcats have avoided major confrontations.

“There's always little incidents where guys get into it over a jump ball, and everyone jumps up. And you know, I think our coaches are very, very alert to hold a guy back, keeping guys off the court and realizing that it could cause further damage for them and our team,” Weber said.

Obviously that wasn’t the case in the final moments of the rivalry game against KU. Weber said based on conversations he had with his players afterward, they thought time had run out and the game was over when they left the bench to participate in the melee.

Both teams left the floor once the fight was broken up, and went to the locker rooms before the game officials brought them back to the court to play one last second.

Self spoke with one fan

As KU’s head coach referenced after the game Tuesday night, he was particularly disappointed that the fight took place among the crowd, where some fans who use wheelchairs watch home games.

Self said Wednesday morning he wasn’t “totally aware” of everything that took place with the fans who were in the midst of the fight, but knew contact was made with at least one.

“It obviously escalated and went into the ADA section, and I actually did speak with one of the persons that was there at the time and was hit — not hit physically, but backed into or whatever — to the point where I'm sure that we’ll correspond with her today to see how she's feeling today,” Self said. “But I do not know basically everything that transpired or talk to anybody more than that one person.”

DeSousa will face the harshest punishment, followed by McCormac.

Agbaji is seen shoving a guy and getting involved.

Marcus Garrett was in there too puffing his chest out and bowing up, but didn't really do anything too egregious.

Looks to me like the rest of the players were trying to de-escalate the situation. Or just getting a front row seat to the show.

Silvio deserves a technical and maybe a game for throwing a punch after being attacked. The three pussycats who went after him should be out for the season with no other punishments to anyone. And the guy who went in for the layup should apologize to everyone.

And the administration needs to stand up for their players.

That video shows a more clear story. Silvio was not aggressive until the K State player pushed him into the defenseless bystander trying to get up from the back of the goalpost. After he hits the one guy and pushes several other people back, you can see him check on the bystander and get pushed into him again. That's when he grabs the stool. It's ugly and clearly could have been prevented but I feel differently after seeing that angle.

In the video, James Love III, an "injured" KSU player appears to fend off attempts by Chris Teahan and Elijah Elliott to keep him back from the fray, tossing Elliott aside. He goes after Silvio and they start to take a swing at each other before KU coach and former player, Jeremy Case, makes a flying tackle of Love and knocks him to the floor. Next, Marcus Garrett and David McCormack proceed to head toward him in a threatening manner. Garrett is held back while McCormack steps over Love and starts to reach down, when he is pulled off by Coach Self.

At about the 19 second point in the video, Love III can be seen making his way through the crowd back in the direction of the KSU section, maybe thinking he can sneak away without being held accountable for his actions. Not likely.

possibly the best play Jeremy Case ever made on our court :)

Not sure who thought it was a good idea for De Sousa to be dribbling out the clock.

Glad to hear that Coach was checking on the spectators. Maybe there weren’t as many people in the section but definitely glad others weren’t hurt.

If the intent of both teams is to just kill the remaining time then it really doesn't matter who is doing the dribbling.

James Love was not even a part of game he should be hit the hardest and yes the punk move to steal down 21. Just very very bad on another’s court he SHOULD be involved highly in punishments

This gives K-State an opportunity to hire a genuine coach.