Behind three double-digit scorers, No. 6 Kansas did enough to come away with a 66-57 win over Texas Saturday afternoon in the Erwin Center.

Devon Dotson, Udoka Azubuike and Marcus Garrett all made enough plays down the stretch to help the Jayhawks (14-3, 4-1 Big 12) earn their second-straight Big 12 road win. Dotson, who returned to action after being sidelined for one game with a hip injury, scored a team-high 21 points on 6-of-16 shooting.

Dotson’s triple at the 2:50 mark gave KU all the breathing room it would need to hold off Texas (12-5, 2-3 Big 12) on the road. He added four free throws in the final minute to effectively ice the game. Azubuike recorded multiple dunks on his way to a 17-point effort in the win. Garrett made several strong drives and finished with 13 points.

The Longhorns, who led by as many as eight in the loss, were paced by a 20-point showing from junior forward Jericho Sims. Junior guard Matt Coleman III joined him in double figures with 10 points in the loss. 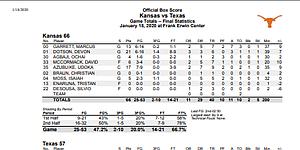 • The game turned when: Trailing 31-26 at the intermission, Kansas elected to switch things up to start the second half.

The Jayhawks turned to their four-guard lineup to begin the second half, which proved to be the right decision. KU still focused on getting points inside, but the spacing created angles for those passes to the post.

Starting center Udoka Azubuike took advantage with a couple quick powerful dunks in the first few minutes. Kansas eventually reclaimed the lead after the early momentum in the second half.

• Offensive highlight: In a game that featured plenty of Azubuike slams, one early in the game was clearly the best.

In fact, it might have been one of the better dunks of his career when factoring how tough it was to catch the lob. Early in the game, Azubuike caught a high lob from junior Marcus Garrett and finished with an emphatic dunk.

No words could do this play justice, so the video is worth watching multiple times.

Just throw it up. The big fella will finish. pic.twitter.com/cWJRPiH8qj

• Key stat: There was some conversation about Azubuike’s free throw shooting after the win over Oklahoma earlier this week. 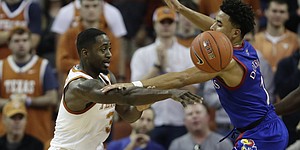 Azubuike went 2-for-2 in the win over the Sooners, and had made six of his previous seven attempts from the charity stripe. He was actually 11-of-17 through the first four games of Big 12 play.

But Azubuike was sent to the line often against Texas, and didn’t have quite that level of success. He finished with a 3-for-9 clip from the line on the day.

• Up next: Kansas will play host to Kansas State on Tuesday.

great road win! The two big line-up seemed to work better today. Another rough day for Ochai, really seems to be struggling in conference play. I'd like to start the two bigs with Moss in and Ochai off the bench.

Agreed Barry, not sure what's up with him but he just looks lost out there. Poor passing, forcing shots, losing his man on D etc. His confidence looks shot and the game seems too fast for him now. Wish he could regain some confidence or something cause at the moment he seems like the 7-8th best option to be on the floor right now. I think coming off the bench might do him some real good and take pressure off of him. Guess time will tell! Great and gritty road win today...RCJH!

big win today! KU really needed to pull this one off and they did.......Ochai needs to be coming off the bench. he is timid. his aggression is almost at zero.....he's supposed to be this amazing athlete, and yet his rebounding is just pitiful...i watched one play where the shot went up and he just turned around, slowly 2 took steps away from the basket, didn't box out, didn't try to get the rebound which bounced right in front of him....the only rebounds he ever gets is when they just kind of land in his hands accidentally. and i really like him, he is just seeming like Wiggins 2.0....all the athletic ability in the world, but no toughness or aggression to his game. you don't even notice he is in the game most of the time. Braun, i notice is in the game. He is fighting for rebounds and positioning.....our driving to the basket is great, but for this team to go very far or win the conference, we are going to have to start making a better percentage and more 3 point shots. our 3 point shotting is horrible.....Moss is about as inconsistent as they come....i would give Braun more playing time and tell him to take any 3's that he is open for and see what happens.......overall, they toughed it out and got the win! Azubuike, Garrett, and Dotson gutted it out for us. McCormack is doing better also.....

agreed. we all know Ochai could be really good, but he seems to be taking some possessions off, sort of floating around at 70% effort. I think his confidence in his shot is really down which is leading him to not be aggressive, the one thing he really needs to do. As much as I like him, the team needs alot more out of his starting position.

Isn't that six games in a row where we have scored less than 30 points at halftime?

I believe Smart has a pretty hefty payout otherwise his chair would be a bit warm by now. I suspect more people in Austin are concerned about Tom Herman which could help divert the attention away from the basketball program.

Ya I'm with you on that. I'm fine sacrificing conference wins so we are healthy in March. And giving your bench experience can only pay dividends later.

This is funny. I hope Coach Self is checking in for the next scouting report.

Dirk maybe he needs to . ....playing injured players does not help the team especially on the defensive end . If i have a player whose bending over and holding his side as Dotson was.... hes coming out Self continued to play him.in a game that we weren t going to win .....Part of being a coach is developing your players and having bench players ready to play when needed. We have a deep roster Braun Enaruna Moss Desouza and Wilson when he returns All 5 are capable and can contribute to the team ....Shortening the bench only wears out players because of extended minutes .....We are 5 games in Dotson is nursing a hip pointer ....Garrett had not 1 but 2 ankle issues.....we have already played a game in which we had players playing all 40 minutes. .....not a good plan

Seems a bit like politics and elections when the challenger can speculate on all the things the incumbent is doing wrong while living in the fantasy world of not doing anything.

This is Bill Self/Eddie Sutton basketball. If we could throw the lob pass and make a couple more 3's a game, I think this is exactly what Coach is looking for. Very reminiscent to 2012 team with Taylor and Robinson.