Despite their lofty ranking and strong record, the third-ranked Kansas Jayhawks are a team in need of some consistent scoring punch.

And they got it from senior shooting guard Isaiah Moss during Saturday’s 67-55 loss to No. 4 Baylor at Allen Fieldhouse — for a half, anyway.

On his way to a team-best 15 points in the Jayhawks’ second loss to a team ranked fourth this season, Moss scored 10 points on 4-of-8 shooting in 14:23 of the first half. The Jayhawks trailed 37-24 at the break.

“How many points would we have scored if he didn’t make shots in the first half,” asked Kansas coach Bill Self after just the 14th home loss of his Kansas career. 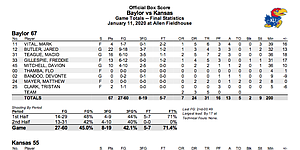 There’s no way of knowing the answer, of course, but Self’s question was a sign of him searching for one. Instead, it was merely another way for the KU leader to point out two key things about his team.

First, that the Jayhawks are in need of additional scorers beyond Devon Dotson (18 points per game but just 9 vs. Baylor) and Udoka Azubuike (12.6 and 6). And, second, that Moss could become that player.

“I thought he was aggressive in the first half,” Self said of the 6-foot-5 guard who went over 1,000 points for his college career on Saturday. “But, you know, he got off to a really good start and then there (in) the second half he missed a couple and then he was hesitant to shoot it after that.”

That’s the last thing Self and the Jayhawks want or need. And it was merely the latest chapter in an up-and-season turned in by the Iowa transfer. After leading the team with 15 points on Saturday, Moss now has led Kansas in scoring three times this season but also finished with 2 points or fewer five times. Three of those ended with Moss going scoreless.

“Well, he shot it,” Self said. “You know, that’s what we want him to do is be aggressive. I thought he did some good things. But I didn’t think it was consistently good in the second half. I mean, he had some open looks and didn’t pull the trigger. That’s what he’s in there for, to look to score.”

In 14 games with the Jayhawks — he did not play in the season opener vs. Duke because of a hamstring injury — Moss is averaging 7.4 points per outing while averaging 21.5 minutes per game. He is shooting 41% from the floor, 36.7% from 3-point range and ranks third on the team in 3-point attempts, with 60.

Those numbers, though modest, are in line with what the Kansas coaching staff thought it was getting in Moss when they recruited and signed him last summer.

But there’s no doubt they would love to see more from the 3-point marksman, particularly on days like Saturday when he plays 30 minutes. Moss started the second half on Saturday and his usage tied for the second most minutes he has played in a single game this season, behind a 36-minute outing in a 45-minute, overtime win over Dayton in Maui.

Although the consistency issue is specific to Moss, Self is not putting KU’s scoring slump — 64.2 points per game over the past five games — squarely on the shoulders of Moss or any other individual player coming off the Kansas bench.

“Everyone needs to step up,” Self said Saturday. “We only play nine guys, and it’s not like any one of them can take the night off.”

Bill Self speaks with the media after Baylor loss by KUsports.com

Pull the redshirt from Lightfoot and start him at the 4.We need some consistent
4 position play. Then, you can forget the 2 BIG MEN offense, which is not working!
Lightfoot is a great rebounder and a reasonable shooter.I think LIghtfoot is 6'9", so we don't really lose anything by not playing DeSousa or McCormack
Let's make some REAL changes that night help the rest of the season

I did not get to watch the game, but I did get to review the stat lines.

The final spread was 12, which correlates to the four more three pointers that Baylor made compared to KU:

We actually out rebounded Baylor at both ends of the court, which reveals that the extra shot attempts by Baylor directly resulted from the turnover battle. Baylor took 9 more shots than KU, and also forced 9 more KU turnovers.

Looking only at the ESPN team stats, it appears that Garrett, Agbaji, Dotson and Moss were outplayed by the Baylor guards.

I think this KU squad wins every game when they are the most aggressive players on the court, but that was not the case his past Saturday at home against Baylor.

Rock Chalk Jayhawk!!! Go play with some pride and aggression, and bring that Big XII trophy back home!

Pretty good analysis. Two Bigs getting more rebounds is expected. But,
KU's guards are getting beat. Baylor was able to strip us of the ball in various different ways and by just out hustling us. <br><br> Free Throws and Turnovers. Az is 23 of 59, and our bench, Braun and Enaruna, are just as bad. BUT... TURNOVERS PER GAME: 14.2 TOPG!!!<BR><BR>
KU is ranked in the top 10 overall but we are ranked like 177th in turnovers per game. We suck because we can't hold onto the ball. Baylor 5 Turnnovers, and KU had 14 - You gotta to be kidding me!
A difference of 10 turnovers @50% is 10 points. 3-4 TO less and better free throw shooting and it could have been different.

That makes four games in a row where we were held to less than 30 points at half-time! Obviously, something's not working and needs to change!

I'm always excited to see point off the bench, it's become a rare sight these last couple of years, but in this case it would have been nice to see some points from the starters. It's kind of like Kansas weather, the average is great but some days are way hotter than average and some are way colder than average. When everyone is shooting below average, it's a really bad day. We need more consistency from the whole team, not just Moss or the bench.

Watching a game like Dayton...I see us playing hard, them playing hard, sometimes you don't win those games. That's OK. We played a really great game and it took all of it for us to win. But I hate it when someone out=physicals us, and pushes us around, especially at home. That's got to stop.

We've lost twice to the Top 5..can't let that happen a third time and expect to get a #1 seed.