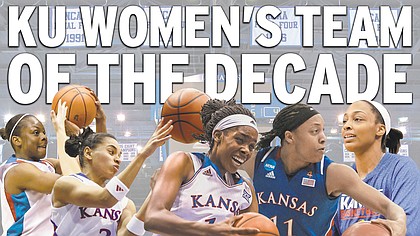 The 2010s in Kansas women’s basketball were marked by losing seasons, crippling injuries and a change in leadership midway though the decade.

But none of that took away from the performances of some of the top players who suited up for Bonnie Henrickson and Brandon Schneider during the past 10 years.

Here’s a quick look back at the Top 10 women’s basketball players who suited up for the Jayhawks at any point between 2010 and 2019.

1 – Danielle McCray – Although her career stretched into the 2010s by just one season, the 2009-10 campaign was as memorable as any for the former KU great from nearby Olathe East High. Before making her way to the WNBA, McCray delivered career bests in field goal percentage (45.5), assists per game (3.1) and steals per game (1.6) while averaging 19.8 points per game to lead the Jayhawks. Even with an ACL injury ending her career prematurely in February 2010, McCray finished in the Top 10 on nine of KU’s all-time stat lists including fourth in career scoring with 1,934 points. 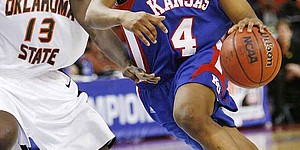 2 – Angel Goodrich – A tough and tenacious play-making point guard from Tahlequah, Okla., Goodrich was the face and the heartbeat of the KU program for several years this decade, despite dealing with serious injuries throughout her career. She led the Jayhawks to back-to-back NCAA Tournament Sweet 16 appearances in 2012 and 2013 and ended her career as a 1,000-point scorer and the program’s all-time assists. Her 771 career assists are the third most in Big 12 history.

3 – Carolyn Davis – The other part of the 1-2 punch that led the Jayhawks to the Sweet 16 in 2012 and 2013, Davis was one of the most efficient offensive players in KU history. A knee injury late in the 2011-12 season forced her to miss the Jayhawks’ 2012 NCAA Tournament run. But she bounced back and help lead the Jayhawks to the same spot a season later. The Houston native closed her career by becoming just the seventh player in program history to score more than 1,700 points and grab 700 rebounds.

4 – Chelsea Gardner – After learning from Davis and playing with her for a couple of seasons, Gardner stepped into the role as the Jayhawks’ primary post player for her final two years on campus and delivered similar numbers. During her senior season in 2014-15, Gardner led the Jayhawks with 16.8 points and 8.6 rebounds per game while earning honorable mention All-American honors. She became the 27th player in program history to reach 1,000 points for her career and went on to be drafted by the Indiana Fever (No. 21 overall) in the 2015 NBA Draft. 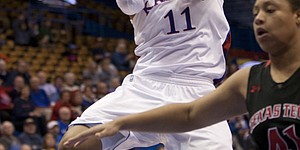 Kansas forward Aishah Sutherland hangs in the air for a shot while avoiding Texas Tech's ...

5 – Aisha Sutherland – A 1,000-point scorer and just the 15th player in program history to finish her career with at least 1,000 points and 500 rebounds, the forward from Perris, Calif., played with passion and raw emotion and was often viewed as the heartbeat of the team. She finished her career second in blocks (149), third in rebounds (916), fourth in games played (130) and 16th on the career scoring list with 1,236 points.

6 – Natalie Knight – One of the best shooters in program history, who hailed from nearby Olathe South High, Knight played a key role on those NCAA Tournament teams with Goodrich and Davis and then went on to establish herself as an elite top option during her upperclassman years. Knight started 114 career games for the Jayhawks and would have started more if not for injuries. Finished her career by becoming the 28th player in school history to crack the 1,000-point mark.

7 – Monica Engelman – Another 1,000-point scorer, Engelman was a key part of the Jayhawks’ triple threat (Goodrich, Davis and Engelman) that reached back-to-back Sweet 16s during the early portion of the decade. A terrific all-around player and co-winner of the team’s Ms. Jayhawk Award her senior season, Engelman set a program record for free throw percentage during her junior season (87.7%) and consistently finished among the team leaders in scoring, assists, steals and field goal percentage throughout her career. 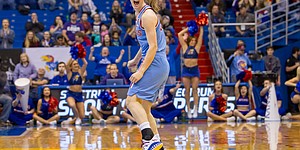 Kansas guard Kylee Kopatich (33) lets out a scream after making a 3-pointer late in ...

8 – Kylee Kopatich – Another sharpshooter from Olathe South, Kopatich made herself into a terrific all-around player and team leader during her four years with the Jayhawks. In addition to earning several Academic All-Big 12 honors, Kopatich became the 29th player in KU history to join the 1,000-point club (she finished her junior season with 979 points) and also led the team in steals, assists and free throw percentage as a senior.

9 – Krysten Boogaard – Native Canadian played parts of two seasons during the past decade, including a senior season (2010-11) in which she passed 1,000 points for her career and earned second team all-Big 12 honors. Left KU second all-time on the program’s games played list, with 132.

10 – Jessica Washington – A transfer from North Carolina who came to KU with huge expectations, Washington showed, when she played, that her talent was as good as anyone’s in the Big 12. But injuries slowed her down and kept her from reaching her full potential. Still, the smooth point guard who was at KU for parts of four seasons earned Big 12 Newcomer of the Year honors following the 2016-17 season and earned several Big 12 Player of the Week honors along the way.