The Kansas women’s basketball team never really had a shot.

Kansas, which was down by 21 points after the first period, was buried from the start in a 97-44 loss to No. 2 Baylor on Wednesday at the Ferrell Center in Waco, Texas. The Bears now hold a 33-8 advantage over the Jayhawks in the all-time series.

For comparison, KU was held to 17 total points in the first half and didn’t score more than 12 points in a quarter until the final period. Baylor shot 56% as a team for the game, while also holding Kansas to a 27% effort from the floor. 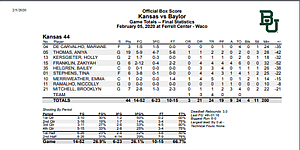 The Bears were superior inside all night, recording a 56-12 advantage on points in the paint. Baylor scored 18 second-chance points, while Kansas didn’t net a single such point. The hosts also had a 41-14 advantage on bench points in the win.

Sophomore Aniya Thomas, who entered the game averaging 11.4 points per game, was the only Jayhawk to finish in double figures. Thomas tallied 19 points on 5-of-9 shooting, including a 4-for-7 effort from beyond the arc. No other KU player scored more than 7 points in the loss.

Baylor had four players reach double figures in the win, led by a 23-point performance from sophomore NaLyssa Smith. Te’a Cooper scored 15 points in 19 minutes of action for the Bears as well.

Kansas will play host to TCU at 5 p.m. Saturday.

When it got to 84-34 with under six minutes to play, I knew we were in trouble.

Time for Schneider to go. It's incredulous that Zenger gave this man an extension for absolutely nothing.

It is probably time for Schneider to go back to Emporia State or maybe a juco somewhere.

The challenge now, of course, is that we’ve bottomed out the program much like football. The good news is that it’s much easier to turnaround a basketball program than it is a football program.

I felt Schneider should be given his full five years because he had proven he could win as a head coach. He’s been given it and it’s time to move on. Zenger’s hiring failures are all behind us now. Time to see if Long got it right in football and whether he can get it right in women’s basketball.

I wasn't sure I saw the score right. I haven't listened to any of the games...keep forgetting to mark my calendar.