A day after running back Dom Williams announced his decision to play out the remainder of his college career elsewhere, 247Sports reported KU receivers Quan Hampton and Evan Fairs also have put their names in the portal.

Both Hampton and Fairs redshirted in 2018 and then played sparingly this past season, after head coach Les Miles and his staff took over the program.

On Tuesday Hampton posted a note to his Twitter account to share his thoughts on his decision. He thanked both head coaches he played for at KU over the past three years, David Beaty and Miles, as well as his teammates.

“Thank you to the University of Kansas, and all the athletic and academic support staff that have helped me along the way during my time here,” Hampton wrote.

Not long after that, Fairs shared a note of his own, in which he thanked KU for giving him the opportunity to “live out my dream.”

“Can’t wait to see what my future has to offer,” Fairs added.

Hampton appeared in seven games in 2019, mostly in the second half of the season. The 5-foot-8 slot receiver from Texarkana, Texas, caught two passes for 19 yards and one touchdown during his redshirt sophomore season. Both catches came late in KU’s road loss at Oklahoma State. 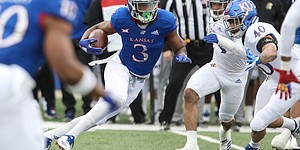 Blue team receiver Evan Fairs takes off after a catch during Late Night Under the ...

Fairs only played in two games this past season, which was his redshirt junior year. The 6-3 target from Fulshear, Texas, caught one pass for 21 yards at OSU, which went down as his total statistical production for the year.

Fairs’ best season at KU by far came as a sophomore in 2017, when he appeared in nine games, started twice and caught 24 passes for 335 yards and a TD.

That same year, as a true freshman, Hampton played in just six games due to injury, but caught 21 passes for 145 yards.

Over the past year a handful of KU football players have utilized the transfer portal.

Running back Khalil Herbert transferred to Virginia Tech after leaving the program during the 2019 season.

Linebacker Drew Harvey entered the portal and then played the 2019 season at Fort Hays State.

Some KU walk-ons also made use of the portal. Quarterback Billy Maples transferred to Drake, while offensive lineman Jack Williams and linebacker Jerek Butcher have inserted their names this offseason.

Players dropping like flies now. How will this affect the 2020 (and beyond) season roster?

Can only give out 25 scholarships a year.

This is the new reality for all programs, not just us. This hurts our depth but not our top end.

KUs lost decade under Zenger could not have timed out worse. As more players transfer, as the conference overreacts to the CFP and adds another major conference game for no good reason, as ISU hires a great coach and Baylor did the same, we didn’t even tread water. We sunk into the muck at the bottom of the pond. And all of the damage was self inflicted.

It’s going to be a grind

Just part of the “get Les what he wants” process. Probably a smart move for these kids to get playing time elsewhere.

I don't know about Hampton but Williams and Fairs are two players who would have seen playing time next year so I'm a little disappointed but there are boatloads of players in the transfer portal. After Wednesday, Les can concentrate on getting some of these guys. Alex Fontana was a graduate transfer and he turned out to be a pretty good player.

I think in about 2 years the NCAA is going to allow 2 or 3 graduate transfers that don't go against the 25 cap, this would encourage the graduates and not penalize teams for taking them. It'll benefit the players and the universities. For instance, both of these players would be limited players next year, but somewhere else, they will be very valuable. Whereas there are probably a couple of players, like the Florida QB, which would be more valuable at KU then UF next year (although I think he'll end up at Miss St); fingers crossed for KU still.

Doesn't seem right that a graduate transfer counts against the 25 cap. When a player transfers as a graduate it means the program they are transferring from did things right. The NCAA likes to refer to them as student-athletes but penalizes the program when they graduate.

I'm not surprised. All a part of configuring this team into HCLM's roster. This is the first year of that. Last year coach went with what he was given.