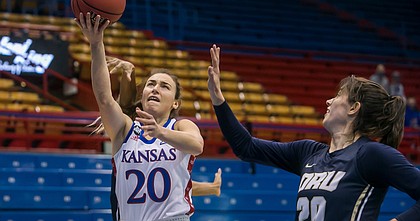 The Kansas women’s basketball team shook off the sting of its first loss of the season by hitting the century mark in a win over Oral Roberts on Sunday at Allen Fieldhouse.

Led by a 25-point outburst by graduate transfer Julie Brosseau, six Jayahwks reached double figures in a 100-59 win that moved KU to 3-1 on the season.

The Jayhawks reached 30 points in both the second and third quarters, including a 39-3 advantage in the second quarter that blew the game open. 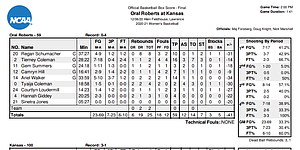 KU coach Brandon Schneider said after the victory that it was the Jayhawks’ defense that most impressed him and led to so many easy buckets. KU won in transition 27-14 and also outscored ORU (0-4) 54-28 in the paint.

“So much of our ability to get out in transition was because we were getting stops and limiting them to one shot,” Schneider said of his defense, which held Oral Roberts to 33% shooting for the game.

Brosseau made 7 of 14 shots from the floor, including three 3-pointers, and also hit all eight free throws she attempted.

KU also out-rebounded ORU 66-25, giving Kansas its most rebounds in a single game since 1993, when KU grabbed 70 boards in a win over Morgan State. The total ranks third on KU’s all-time single-game rebounding list.

The Jayhawks will look to carry over the momentum from their latest win into Thursday’s Big 12 opener against Oklahoma at Allen Fieldhouse. Tipoff is set for 7 p.m.