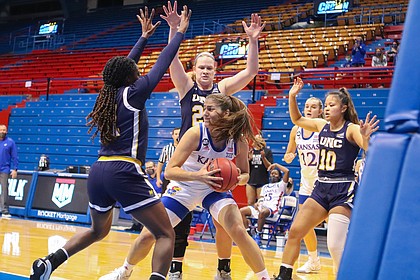 Following a 2-0 start to the season, the Kansas women’s basketball team will face its toughest test yet when it travels to Ole Miss (1-0) Thursday night. Tipoff for the nonconference clash that is part of the annual SEC/Big 12 Challenge is slated for 7:30 p.m.

Kansas has not trailed at any point this season on its way to back-to-back wins over Northern Colorado and Texas A&M Corpus Christi. The Jayhawks earned a 78-62 victory over the Bears in the season opener and cruised to an 85-43 win against the Islanders last time out.

A combination of hot shooting and strong defensive play has paved the way for the hot start by KU. Kansas drilled 11 3-pointers and forced 20 turnovers against Texas A&M Corpus Christi just a few days ago.

According to Her Hoops Stats, a website focused on analytics for women’s basketball, KU has an offensive rating of 111.6 through two games and ranks 32nd in the country with that mark. Kansas is 30th in the nation in defensive rating with a mark of 70.5.

What: Kansas at Ole Miss

Where: The Pavilion at Ole Miss

Quick Note: KU’s impressive nonconference streak, which dates back to December of 2018, could be in jeopardy. The Jayhawks, who went undefeated in non-league action a season ago, have now won 17 consecutive nonconference games entering this road matchup with Ole Miss. The last time Kansas dropped a nonconference game was to Nebraska on Dec. 5, 2018.

Streaking: Sophomore Holly Kersgieter has led Kansas in scoring in back-to-back contests to start the season. Last time out, Kersgieter went 5-of-6 from long range to finish with 17 points in 20-plus minutes of action. This came after Kersgieter scored 21 points and grabbed 11 rebounds in the season-opening win against Northern Colorado.

Slumping: When a team is undefeated and has yet to face a deficit, there are not too many players having an off night. It would be nice to see freshman forward Ioanna Chatzileonti become more involved in the offense after scoring just 6 points in her last outing. Chatzileonti was the only starter not to reach double figures, although the 6-foot-2 forward did collect 15 rebounds and earn Big 12 Freshman of the Week honors.