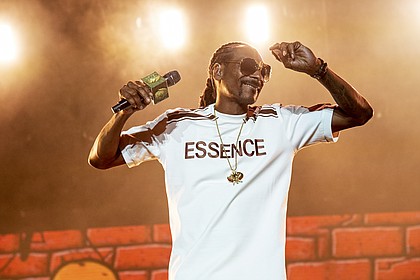 World-famous rapper, producer and television personality Snoop Dogg will be the headlining performer at the University of Kansas' annual Late Night in the Phog.

The 35th annual Late Night in the Phog, which kicks off the start of the KU men's and women's basketball seasons, will be held Friday, Oct. 4.

KU announced the performance on its social media channels Friday with a video featuring KU men's basketball coach Bill Self and prominent Adidas branding. Snoop Dogg has a line of shoes with the apparel company, which recently renewed its contract with KU — one of the largest apparel deals in college athletics. The company's involvement in an ongoing college basketball recruiting scandal landed KU in major trouble with the NCAA earlier this week.

Snoop Dogg is the latest in a string of well-known musical acts that the university's athletic department has brought in for the event, which serves as a prime recruiting opportunity for the KU basketball programs. Rapper 2 Chainz performed at Late Night in 2018, with Lil Yachty performing in 2017 and Tech N9ne performing in 2016.

What?? We couldn't get Miley Cyrus??

Does Adidas sponsor Miley? Looks like some corporate makeup gifting.

Can't wait to see all the MAGA HATS in the stands!!!!

If you don't understand how getting a big name like this is enticing to our players and recruits, no one can help you. This isn't about you. This is about recruiting.

I'm not sure who 2 Chainz, Lil Yachty or Tech N9ne are, but I sure as hell know who Snoop Dogg is!!!

Heck, I'm a 71 year old white guy and even I can still realize what a mega deal for Kansas recruiting is. The joint will be jumping.....OOPS, that kind of came out wrong!! :).

jumping? I think the kids these days prefer the term "lit"

which is even worse in context.

I thought he preferred to be called Snoop Lion now. Could be that I am still 5 years behind the curve though.

Stupid.. that's my opinion. Be the difference maker. Not a follower. Invite the AGT folks, inspire kids, college students with positive people, not gangster-lifestyle, not sex-, not drugs- lifestyle. This is the University of Kansas, people. What's so special with these rappers? SMH...