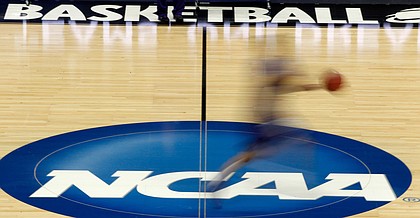 A federal judge has denied the NCAA’s request for evidence in the college basketball corruption trial that may have included information about the University of Kansas basketball program’s recruiting practices.

Judge Lewis A. Kaplan on Tuesday denied the NCAA’s motion to become an intervenor in the case, which would have allowed the organization to obtain unreleased evidence collected by the FBI. The ruling sides with the government's prosecutors in the case, who opposed the release of the evidence.

The additional information the organization was seeking could have included recorded phone conversations and text messages the FBI gathered in an investigation that was not used as evidence in an October trial where a jury found former Adidas executive James Gatto, business manager Christian Dawkins and amateur league director Merl Code all guilty of fraud.

Kaplan’s denial of the NCAA request means the organization cannot use the unreleased evidence for its own investigation into the KU basketball program for possible major recruiting violations. However, it can use evidence that was entered into the case during the trial, which is public record.

In his ruling, Kaplan said he was denying the NCAA’s request because the organization intended to use the unreleased information to implicate people of potential wrongdoing who were not defendants in the case, which could damage their reputations.

"The materials relate to potential rules violations of third-parties not on trial in this action, which might be regarded by certain segments of the public as scandalous conduct," Kaplan said in the ruling. “Disclosure carries the risk of certain significant reputational and professional repercussions for those referenced in these documents.”

Kaplan added that the evidence the NCAA requested includes “hearsay, rumor and speculation” and the people who would be implicated in the evidence would not have the chance to defend themselves in court.

“Furthermore, the individuals referred to in these documents are not standing trial,” he said. “They will not have the opportunity to test the reliability of the information contained in these materials nor respond adequately to any inferences that might be drawn on the basis of this information. In other words, the documents are of a sensitive nature, and the degree of injury is high."

During the October trial, testimony at times focused on KU coach Bill Self’s relationship with government witness T.J. Gassnola. The former Adidas consultant testified that he paid the families of players to steer them to KU, including $90,000 to the mother of Billy Preston and $2,500 to the guardian of Silvio De Sousa. Gassnola testified that he never told Self about the payments. Prosecutors also presented text message conversations that Self and KU assistant coach Kurtis Townsend had with Gassnola.

It’s not known what, if any, other text messages KU coaches exchanged with Gassnola during the recruitment of players. The Journal-World previously filed a request under the Kansas Open Records Act seeking all text messages between Self and Gassnola, but Kansas Athletics denied the open records request. Kansas Athletics cited, among other reasons, a provision in the law that allows records to be withheld if the public records contain “information of a personal nature where the public disclosure thereof would constitute a clearly unwarranted invasion of personal privacy.”

It’s not clear if the additional information the NCAA was seeking would have had any more details about KU’s involvement in the scandal.

While the information Gassnola revealed led to the NCAA ruling De Sousa ineligible to play for KU until the 2020-21 season, the organization later reinstated him after an appeal and after he already had missed the 2018-19 season. How the information will affect the KU program as a whole, such as possible NCAA sanctions, has not yet been determined.

When the NCAA will be able to conclude investigations related to the scandal is not clear. Stan Wilcox, NCAA vice president for regulatory affairs, told CBS Sports in June that the organization would begin sending out Notices of Allegations — the NCAA’s equivalent of an indictment — to at least six college basketball programs this summer.

However, only one program caught in the scandal, North Carolina State University, has been charged with violations so far.

So as of right now a $90k payment when KU found out about it benched the player and the individual never played at KU.

A $2500 payment when KU found out about it benched the player for an entire year until the NCAA cleared him to play.

Move along...these aren't the droids you're looking for.

It must seriously gnaw at the NCAA (and we all know how painful that can be) that they don't have absolute power at all times. Couldn't happen to a nicer group of people.

Sure they do. They've penalized us before, they can do it again and don't need permission from the courts to do so.

You do realize the NCAA is not some nebulous organization out to "get" certain schools they don't like.

"The Division I Committee on Infractions (COI) is an independent administrative body charged with deciding infractions cases involving NCAA member institutions and their employees. Each committee is comprised of individuals serving as volunteers from NCAA member institutions and conferences and individuals from the general public who have legal training. As authorized by the bylaws, the COI has authority to address prehearing procedural matters, set and conduct hearings or reviews, find facts, conclude violations of NCAA legislation, prescribe appropriate penalties and monitor institutions on probation to ensure compliance with penalties and terms of probation, as well as conduct follow-up proceedings as may be necessary. The committee is also charged with hearing the appeals of individuals subject to a show-cause order in Level III cases, as well as other duties as authorized by the bylaws."

"Independent." That's why they hammered USC for Reggie 's parents living in a free condo and let Auburn walk after ol' Scam Newton's family received 180 K in cash. How about Zion Williamson's family? Tell us another story.

Yep Len Shaffer, you know the NCAA is really pissed about this ruling. What they need to do is move on to the NIKE case, and leave our Jayhawks alone! Or look at Duke, who we all know paid Zion! Now they can’t put a major violation on us, but we may lose a Scholarship-But I hope they don’t do anything, since they screwed us/Silvio! To penalize him for a whole season was a bunch of crap!

Hearsay, rumor, and speculation though it’s worth realizing that pertains to Zion/Duke as well.

It’s interesting to see the judicial system casting such a large shadow over the NCAA. Puts lots in perspective.

That photo cutline/caption is not up to date.