Austin, Texas — Les Miles didn’t shake up his coaching staff in the middle of the season to play it conservatively with a chance to knock off a top-15 ranked Texas team on the road.

And even though the Mad Hatter and the Jayhawks opted for heroics, the Longhorns dashed those chances with no time left, as Cameron Dicker’s 33-yard field goal sent KU back to Lawrence with a 50-48 loss.

Down 7 with only 2:47 left in the game, the KU offense, coached by new coordinator Brent Dearmon for the first time, went 75 yards in 1:36, as Stanley’s fourth passing TD of the game, and second to Stephon Robinson Jr., got KU within 1 on the scoreboard.

Instead of tying the game up with an extra point, the Jayhawks went for 2 and some glory, as the program looked to secure its first ever win in Austin.

During a drama-filled debut for new offensive coordinator Dearmon and all of the Jayhawks, in front of an announced crowd of 97,137, KU’s defense made sure to share the spotlight.

A forced fumble by Mike Lee and an interception by Najee Stevens-McKenzie — both in the fourth quarter — meant the Longhorns couldn’t coast to a win in crunch time. 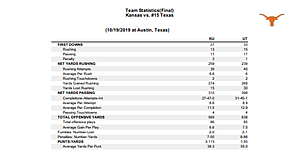 KU even overcame a dire extra point debacle to tie the game up at 40 with less than five minutes left in the fourth, before nearly pulling off the upset in the final stages of a wild college football battle.

Liam Jones’ fourth-quarter field goal from 46 yards with 6:56 to play revived KU. And receiver Andrew Parchment sent the Jayhawks’ sideline into a frenzy with an 11-yard touchdown snag with 4:25 left — two plays after KU’s first fourth-down conversion of the season on an incredible Charlot catch.

KU’s chances at the marquee upset victory suffered a crushing blow when both teams scored at the 10:06 mark of the fourth quarter.

Poised to tie the game up at 31 after what appeared to be an opportune Stevens-McKenzie interception early in the fourth, disaster struck for the Jayhawks on an extra point.

Pooka Williams Jr.’s second rushing touchdown of the night was still fresh on the scoreboard when Texas defensive end Malcolm Roach blew up the notion of a tied game, easily swatting Liam Jones’ would-be tying extra point out of the air.

What could have been just a momentary setback turned into a momentum-swinging scoring chance for the UT special teams, as D’Shawn Jamison secured the loose football and took off for a 98-yard play, extending the Longhorns’ lead to 33-30. 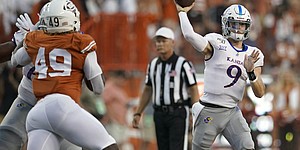 With the Longhorns still riding the wave of the extraordinary special teams snafu for Kansas, the UT offense made sure to bury the Jayhawks as best they could.

One minute and 34 seconds after the Jayhawks thought they had tied it up, Sam Ehlinger found Devin Duvernay open deep down the field for a 43-yard touchdown, setting the Longhorns up for a 40-30 lead.

An untimely development, Kansas punted on consecutive series for the first time all night in the second half, after opening the third quarter with an eye-opening TD drive.

Down seven with 14:01 left on the fourth quarter clock, KU needed a scoring response to Texas. Instead, the offense only mustered 23 yards on eight plays.

KU got to open the second half on offense and Dearmon, Stanley, Williams and company made sure to take advantage.

A 3rd and 10 completion from Stanley to Daylon Charlot helped to avoid a punt early in what turned into a 14-play touchdown drive for the Jayhawks. KU’s senior QB also hit Kwamie Lassiter II and Andrew Parchment for 1st downs on the series, before capping it with a nine-yard strike to Stephon Robinson in the end zone, setting up a 24-21 lead for Kansas.

It took veteran Texas QB Sam Ehlinger and the Longhorns fewer than three minutes to at least tie the game up, even though they couldn’t take back the lead on a nine-play drive that concluded with a successful 39-yard Cameron Dicker field goal, two plays after KU linebacker Jay Dineen delivered a timely sack on 2nd and 10.

However, KU’s second offensive possession of the second half only yielded one first down and 15 yards, meaning the Jayhawks needed punter Kyle Thompson to boot the ball away for his second punt of the night.

Failing to keep pace on that series quickly caught up with the Jayhawks. With a 4th and 2 conversion by Texas running back Roschon Johnson keying another Longhorns TD drive, KU found itself in a 31-24 deficit less than a minute into the fourth quarter, after receiver Devin Duvernay took a pass from Ehlinger in for a 14-yard score.

KU didn’t call upon punter Thompson until the final minutes of the second quarter. The Jayhawks’ first four possessions ended with either a field goal try or a touchdown, as the underdogs, coming off a bye week, seemed ready for the challenge of taking on a top-15 team on the road.

Williams had 129 rushing yards by halftime — and would have had 32 more and a second rushing score, too, had he not stepped out of bounds on what appeared to be a TD in the second quarter.

With the offense averaging 7.5 yards per play in the first half, KU had a shot at heading to intermission down just a point, despite of falling behind by 14 in the first quarter.

UT linebacker Joseph Ossai sped through a gap in KU’s protection up front, allowing him to easily block a 37-yard field goal attempt from Jones.

A bad snap on 4th & 2 for UT at midfield helped the Jayhawks’ defense get off the field unscathed for the first time all night. Receiver Jake Smith took the low snap but was stopped by Azur Kamara, giving the Jayhawks, down 14-0 at the time, something about which to feel good.

The Longhorns’ offense opened the night gashing KU’s defense and setting the stage for a possible Texas rout. The Jayhawks trailed before the Dearmon-led offense even got on the field.

It only took Sam Ehlinger and the burnt orange offense six plays to travel 65 yards for a touchdown after KU’s opening kickoff from Liam Jones sailed out of bounds, to the left.

KU couldn’t match the home team on its debut drive under Dearmon, and after a Jones field goal missed, Texas jumped ahead 14-0.

Tomorrow, I’ll take consolation in the fact the offense performed so well but JFC, can this program just get one GD break.

1. Our defense is TERRIBLE. we need some help. Need to recruit some DEFENSE.
2. I’m through with “we played better and covered the spread” victories. Time to actually start winning some games.
3. I remember just before the season opener, when KU announced Stanley as the starting QB. Many posts about how terrible it was and we must suck at the QB position. 4 TD’s and no picks. Stanley is actually a pretty good QB.
4. Next week may be our last chance to win this year.

You're really going to be harsh after this game? Wow. Try to control your emotions man.

And I thought I was bent outta shape.

I feel bad for the guys tonight. They made some big plays and overcame a lot of adversity and led with 5 seconds left in the game. There is one play that will haunt them. That one play was ultimately the difference in the game. Blocked PAT returned for 2 points by Texas. But they silenced the Texas crowd chirping at them for sure.

Exciting times ahead now. Dearmon offensive mind is exactly what Jayhawk nation has been starving for.

Come on folks. This was a great game. Had you been told the final score before the game, how many would have taken it? Yes, we made some mistakes. Very few teams ever play a perfect game. This game was great improvement. Come on, we played the 15th ranked team in the nation! We almost beat them AT THEIR PLACE! I see us possibly being in every game left. We've played the top two teams quite well and almost beat one of them.

Great game, Jayhawks! The whole team should hold their heads high after this one.
No question there were mistakes. They are correctable. Get ready for TTU and show the Jayhawk Nation what you're capable of!

RCJH! Let's fill the stadium with BLUE next Saturday!!!

PS. Was it my imagination, but did the clock start almost immediately after the ball was placed down after each KU first down in the final two minutes and didn't start until just before it was snapped by UT after each of their made first downs in the final drive? Home cooking maybe? I'll have to review the recording tomorrow.

Not only that, but we got some really crappy spots, especially when it was close to the first down marker. I remember at least three spots that were a yard short of what they gained. And what about that "fair catch" by Texas at the 1 yard line that the refs brought out to the 25!?! WTF? Regardless, those Jayhawks fought like heck and I'm proud of them.

Great game, reminded me of the Mangino era when we were competitive. Les appears to have us on the right track.

I now live here in Dallas. My Texas alumni neighbors aren't very excited about this game, so they know they got lucky. I wish the final result was different, but our guys played with heart. Carter was a beast. We have a bright future.

even though i would have loved the victory .....the jayhawks competed to the end. The kicking game had a 9 point swing which was the difference in the game ...2 missed field goals 1 block returned for 2. But to lose a close game that we had no business being in hurts more to the guys than being blown out by 30 . none the less we support you and your effort .

Our kicking game and our defense (allowed 638 yards) are the reasons we lost that game!