No, the Jayhawks aren’t completely overhauling their offense in the middle of the season. But head coach Les Miles decided to fire offensive coordinator Les Koenning and replace him with Brent Dearmon, so changes should be expected as KU returns from a week off to play at No. 15 Texas.

If the reports from KU’s closed practices since Dearmon took over as OC are any indication, the in-game play-calling and overall offensive strategy should look different immediately.

Senior quarterback Carter Stanley is most comfortable when running the RPO plays Dearmon was known for during his stint as a head coach at Bethel University (NAIA) and OC at Arkansas Tech (Div. II). And Stanley said the KU offense had some “great” 11-on-11 periods as well as a mini scrimmage during the bye week, as the players got acclimated to Dearmon, formerly a KU senior offensive consultant.

“Coach Dearmon isn’t reading off a script,” Stanley said. “He’s truly going off of what he would call in a game. That was really good, I would say, for coaches and players. Our guys reacted well.”

Benton's back, Dearmon's debut and Azubuike above all

On this week's KU Sports Hour we discuss the return of Benton Smith, Brent Dearmon's debut as O.C. at Kansas ...

KU’s offensive players also said Dearmon has emphasized tempo at practices, meaning they play with pace between snaps and move quicker than usual when they’re running away from or toward the sideline.

Said junior receiver Andrew Parchment: “I definitely love the new edge that we have on the offensive end, with us just sprinting onto the field. I know a lot of teams don’t do that, so it’s probably going to catch a lot of teams off guard, and just shows that we’re ready to play football.”

In KU’s first six games, Parchment and sophomore running back Pooka Williams Jr. proved to be the most productive skill players. Asked how the switch to Dearmon might help showcase them even more, Parchment looked at it from another angle.

2. Make the most of your situation

The restructured KU offense might be catching the Texas defense at an ideal time. Head coach Tom Herman has seen a number of the Longhorns’ defenders suffer injuries in the past few weeks, impacting UT’s depth on that side of the ball.

Although Herman told reporters in Austin, Texas, this week that linebacker Juwan Mitchell is expected to play against KU, linebacker Jeffrey McCulloch is out and safety Chris Brown might not be back until late November.

Earlier this year, Texas also lost three other starters due to injuries: cornerback Jalen Green, safety Caden Sterns and nickelback Josh Thompson. None are expected to play versus KU.

What’s more, senior defensive end Malcolm Roach will have to sit out the first half against the Jayhawks after getting ejected for targeting against Oklahoma this past weekend.

If Dearmon and KU’s offense can keep a banged-up UT defense out of sorts, the Jayhawks should be able to keep the game competitive.

It has been obvious all season that KU’s star offensive player, Williams, needed to get the ball outside on the edge to maximize his playmaking. And now that Dearmon is the OC, it seems like those types of calls will be the norm.

Williams got plenty of touches when Koenning was overseeing the offense. But too often the 5-foot-10, 170-pound sophomore from Louisiana was asked to rush between the tackles into a loaded defensive box.

Dearmon told Williams on the day he was introduced as the new OC that he was going to get the running back the ball on the edge.

“I mean, we had plays in space,” Williams said, “but that triggered me a lot more, knowing he’s trying to get me in space and not really running through the middle all day.”

Dearmon, who worked as an analyst at Auburn for Gus Malzahn from 2013-14, wants to use Williams the way Auburn used backs Tre Mason and Kerryon Johnson.

Williams (89 rushing yards per game, 4.9 yards per carry, one touchdown) considered that a good sign, and said Dearmon expects him to make big plays for the offense in the weeks ahead, playing off the strengths and threats of KU’s passing game.

“I told him I’m ready for the challenge,” Williams said. 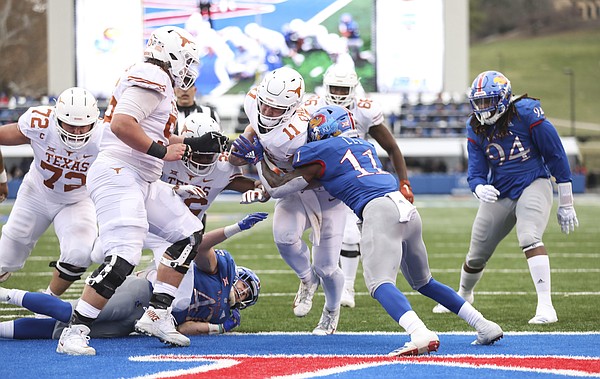 Texas quarterback Sam Ehlinger (11) powers his way into the end zone for a touchdown during the third quarter on Friday, Nov. 23, 2018 at Memorial Stadium. by Nick Krug

He may not be a Heisman Trophy candidate like Oklahoma’s Jalen Hurts, the last quarterback Kansas faced, but Texas junior Sam Ehlinger is one of the more productive QBs in college football.

Ehlinger has proven himself as a runner as well, averaging 37.8 rushing yards per game, with five rushing TDs this season.

So how does KU stop a dual threat QB?

“I think we’re going to see that week in, week out, playing in the Big 12,” senior safety Bryce Torneden said. “Obviously his level of resume and how great a player he is brings a different level of preparation that we’re going to have to have.”

Miles said Ehlinger reminds him of former Florida All-American Tim Tebow, even if, according to the former LSU head coach, Tebow was “maybe a little faster, maybe a better runner,” but not by much.

While Ehlinger has thrown TD passes to eight different teammates, senior receiver Devin Duvernay has proven to be his favorite target. Duvernay’s 53 receptions easily lead the team, with Jake Smith coming in second at 16 catches.

If the KU secondary can take away Duvernay and coordinator D.J. Eliot’s group as a whole can find a way to make Ehlinger one-dimensional, it will significantly improve the Jayhawks’ upset chances.

The midseason promotion of Dearmon could be the chicken soup an ailing group of Jayhawks needed. Parchment likened the switch at offensive coordinator to having a new cook in the kitchen.

“There’s a couple things that taste different. Just the energy’s out there,” Parchment said. “Coach Dearmon’s a very high energy guy, so he’s definitely going to get in your face when you mess up, and then at the same time love you up when you do good.”

The move might even benefit KU’s defense, too, even if to a lesser extent. Torneden praised the offense’s energy since the switch and explained how that actually boosted players on the other side of the ball.

“It just gives us more confidence,” Torneden said, “knowing that the offense is 110% confident in their game plan and they have that energy collectively over there.”

It seems everyone in KU’s football facility is feeling upbeat heading into the second half of the schedule, and Miles has Dearmon to thank for a large part of that.

I think I'd feel pretty good about a 41-27 loss at the hands of Texas on the road.

UT is not going to be generous.

Big underdog on the road, nobody is giving KU a chance, and not able to watch on regular TV. Sounds like the BC game - prediction KU 48 - UT 24. One can dream. Rock Chalk.