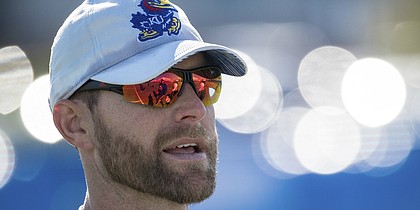 The third offensive coordinator Les Miles has hired since taking over the Kansas football program in November of 2018, Brent Dearmon’s contract could keep the recently promoted senior offensive consultant with the Jayhawks through the 2025 season.

A copy of the contract, obtained by the Journal-World through an open records request, shows that Dearmon’s first two years — which include the remainder of this season, and all of the 2020 and 2021 seasons — are guaranteed and will pay him $250,000 each of those years.

Given the timing of Dearmon’s promotion, in the middle of the season, once Miles fired Les Koenning, the rest of this year and all of the 2020 season are lumped together as “year one” of the contract. 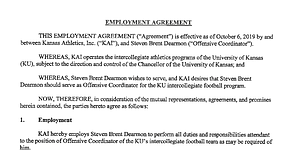 Dearmon will receive a $225,000 base salary, as well as $25,000 for personal services, described as educational, public relations and promotional duties assigned by the head coach and director of athletics.

• 5% of his salary for KU playing in a bowl game

• 15% of his salary for KU making the College Football Playoff

• 20% of his salary for KU winning one CFP game

• 25% of his salary for KU winning a national title

The incentives are non-cumulative, so Dearmon would only receive the highest of those bonuses if more than one was achieved in the same year. The contract also states that Dearmon would have to coach in a given bowl game to receive a bonus, so if he were to leave for another job before KU actually played in a given postseason game he would lose that additional money.

If some other program hired Dearmon away at any point — during the first two guaranteed years or any subsequent year after KU exercising an option — KU Athletics would be owed a $500,000 buyout.

There also is an additional 5% bonus for Dearmon if KU plays in the Big 12 championship game, regardless of the outcome.

Additionally, Dearmon can receive a raise in his salary based on KU’s success on the field.

His annual personal services agreement would increase by one of the following non-cumulative amounts if KU were to achieve the following:

There are two more non-cumulative scenarios that would give Dearmon additional money in his annual personal services payments.

One is tied to KU’s number of wins:

If KU decided to fire Dearmon “without cause,” it would owe him the remainder of his guaranteed salary. He would be owed no money if fired for cause — such as criminal conduct, some sort of NCAA violation, insubordination or a serious HR violation, for example.

Chip Lindsey, who Miles initially hired as O.C. before Lindsey left to become the head coach at Troy, was due to make $500,000 at KU in 2019. Lindsey’s deal would have paid him more in ensuing years of a four-year, $2.65 million agreement, with KU holding an option for the fourth year.

Lindsey’s deal allowed him to leave KU to become an FBS head coach without a buyout.

Just as Jeff Long will thrive or vanish based upon the hiring of Miles, Miles’ future now rests largely on the success of the Dearmon promotion. I’m optimistic. I wasn’t super excited by either of the first two hires but their resumes suggested competency, which was a step in the right direction. This hire represents opportunity. Is a young, dynamic guy capable of moving us up the standing offensively? I think it could be a great move and will go on record that it’s the right move. Now, let’s put some Longhorns on their heels this Saturday.

Nice but not too big of a salary plus Big incentives for Big accomplishments. This is the way all professional coaches and professional players for that matter should be paid....period.

I agree with you Brian Wilson. However, given how dynamic of an offensive guru he is supposed to be, In very surprised how low his salary is, compared to what Koenning was making!

If we do really well there is room for an additional increase for him. If you start someone too high when it was not needed to secure their services, you remove that incentive. Standard business thinking.

The money made by college football coaches is simply staggering.

Anyone else find it interesting that the contract length was for 6 years? One year past the 5 year deal HCLM has. Coincidence? I think not. If Brent turns out to be the find it appears the KU contingent thinks they have, and he is very successful in the coming years, we may be looking at our new HC when Miles hangs it up. Just a thought. Rock Chalk!!