KU cornerback arrested in Missouri on suspicion of failure to appear 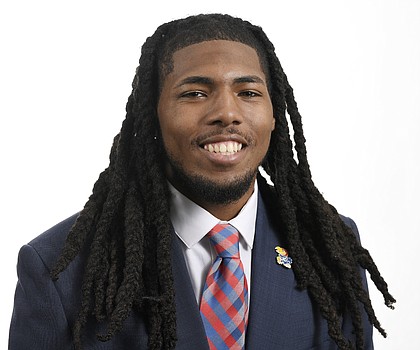 A University of Kansas football player was arrested Monday morning in Missouri.

Corione Harris, 20, was arrested on suspicion of failure to appear, according to the booking log on arrests.org.

Per court logs, Harris received a ticket for speeding on March 8. Harris’ license was suspended on July 29 after missing his court date on July 23.

“We are aware of the matter involving our student-athlete and will handle it internally,” Kansas Athletics spokesman Dan Beckler said in a statement to the Journal-World.

The Platte County Sheriff's Office did not respond to a phone call seeking more information Monday afternoon, but a current inmate list did not show Harris’ name.

Harris, a sophomore cornerback from New Orleans, has played in all six games this season for the Jayhawks. Harris has 14 tackles on the year, while recording two pass deflections as well.

Last season, Harris played all 12 games as a true freshman. He finished with 44 tackles and one interception to go along with five pass deflections. Harris, who was a four-star recruit out of high school, was brought to the program by the previous coaching staff.

Dipsh*t. He needs to worry more about how he plays than he does his glorious mane. And maybe he should show up at court or pay the fine before the court date or just get his sh*t together. And maybe intercept a pass every once in awhile.

BFD. Speeding ticket. Who doesn't have one.

Its not who doesn't have one...just pay the damn fine and be done with it.

Not defending him at all but is this really news worthy. Here we go again LJW THE LONE RANGER RIDES AGAIN

A college student gets a speeding ticket and doesn't pay fine! This is an outrage!
Call in Woodward and Bernstein, we need to get to the bottom of this immediately or before you know it, college kids will get out of control and start drinking or having sex.

Before you know it.

"Suspicion" of failure to appear? Does that mean that the court "suspects" that he didn't appear? Are there any lawyers out there who can explain that wording?

Coach Miles should mandate crew cuts for all and be done with all this tomfoolery. And lights out at 10 pm.

Just freaking go to court. Nobody is going to frown on you for having to go. You aren't the only one.