No. 5 KU overcomes slow starts in both halves to take down No. 23 OU

Say this for the fifth-ranked Kansas men’s basketball team: It sure does know how to make things hard on itself.

The latest example of this reality, call it unnecessary complexity, came Wednesday night at Allen Fieldhouse, where the Jayhawks struggled through sleepy starts to both halves, but still held off No. 23 Oklahoma, 70-63, in the Big 12 opener for both teams.

If you were to judge this one by the first three minutes of either half, you might have shut off the television or left Allen Fieldhouse early.

The Sooners (11-2 overall, 0-1 Big 12) raced out to a 7-0 lead before KU woke up in the first half and also opened the second half with a 11-1 run that cut a 15-point halftime deficit to just five during the first five minutes of the second half.

The Jayhawks (12-1, 1-0) did plenty during and around those rough patches to pick up their 28th consecutive win in a conference opener. But had their play during the first five minutes of the second half at all resembled the final 15 of the first half that got them that double-digit lead, OU would have been put to bed much earlier.

“If we just can capitalize on getting those stops when we’ve got teams down, I think we’ll have a much easier (time) closing out games,” said senior Dedric Lawson after recording yet another double-double of 13 points and 15 rebounds that included 8 of each in all 20 minutes of the second half. “Coach talked about coming out with energy at the beginning of games and at halftime. And that’s something we’re definitely going to have to do now that conference play is here. We’re not always going to have a 15-point lead going into the half, so we’ve just got to pick it up.” 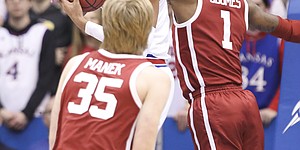 View a gallery of images from Wednesday night's game between the Jayhawks and Sooners at Allen Fieldhouse.

Added freshman point guard Devon Dotson: “Yeah, it’s a little frustrating. When we have a 15-point halftime lead, we know we can come out there and really put them away. If we get out to a 6-0, 10-0 run, we’d really put them away. But we didn’t. So we had to battle back and just stay strong and finish out the game.”

The Jayhawks did just that by answering every mini-OU run down the stretch with a tough play, big steal or key rebound that allowed them to keep the Sooners at arm’s length. OU cut the KU lead to four in the final minute, but could draw no closer.

After runs of 21-4, 17-5 and 17-8 at various points during Wednesday’s victory, Kansas’ final blow, for which OU simply had no answer, came when the Jayhawks went small and scored on four straight possessions midway through the second half, with three baskets coming from Lawson and the fourth on a 3-pointer from Dotson in the corner opposite KU’s bench after yet another perfect pass from sophomore guard Marcus Garrett.

“That was the best pass of the game without question,” KU coach Bill Self said after the victory.

Garrett, who played 28 minutes and finished with five assists and just one turnover, was a key part of KU’s four-guard lineup that helped keep Oklahoma off balance and allowed Kansas to better feature Lawson in a position to score.

While that strategy helped Kansas survive, it still might not have been enough had it not been for some key timing.

With Kansas leading by nine inside the final five minutes, Oklahoma coach Lon Kruger made a move that worked wonders last year, fouling KU big man Udoka Azubuike to intentionally send him to the free-throw line, where Azubuike entered the game as a 36 percent free-throw shooter.

Azubuike missed the front end of a one-and-one situation the first time Kruger went to the strategy with 4:32 to play, but the Sooners could get just one point from it on the ensuing possession.

From there, Self subbed Azubuike out at the under-4 timeout and the KU center remained on the bench the rest of the way.

Four Jayhawks reached double figures in scoring in this one, with Dotson’s 16 points and four steals on 4-of-10 shooting from the floor and a 7-of-8 clip at the free-throw line leading the way.

But it was freshman Quentin Grimes, who scored 11 first-half points and made a huge defensive play late in the second half who might have made the biggest difference. 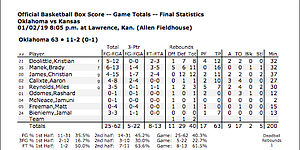 After turning the ball over with 2:41 to play and KU leading by just six, Grimes, who shot 6-of-11 overall — most coming in transition — dove in and stole the ball back and quickly flipped it ahead to Dotson for an and-one layup that put Kansas up by nine.

“That was the best play he’s made all year,” Self said of Grimes’ steal and assist. “That was a great play. And the reason it was, was because he turned it over and went and got it back. ... It could’ve been a 5-point swing real easily just on that one play. Great play.”

Added Grimes of his thoughts on the play: “(It) kind of swung the game. I know how tough Big 12 play is and we don’t want to let any game get away from us, especially at home.”

That mindset, and the collective effort to make plays in key moments like the one Grimes made late, carried Kansas to victory.

While it might not have been pretty from start to finish and certainly featured as many warts as highlights, Self was willing to look big picture when it was all said and done.

“Even though we didn’t do a lot of good things, we’ve won a lot of games like tonight over the course of the years, where you don’t play great but you make sure the other team doesn’t play quite as well as what you do,” Self said.

The next opportunity to do that — or something better — comes at 4 p.m. Saturday in Ames, Iowa, where the Jayhawks will get their first Big 12 road test of the 2018-19 season against Iowa State. The Cyclones (11-2, 1-0) kicked off their Big 12 schedule with a 69-63 road win at Oklahoma State on Wednesday night.

KU Sports Extra - OK Does It vs. OU by KUsports.com

Lon Kruger's Sooner teams are always tough to beat, and honestly, last year's 30-point win in the Phog was an anomaly. So there's a sense that I'm not surprised that Kansas had as much trouble beating the Sooners as they did. But at the same time, I am disappointed in the lack of defensive intensity in the second half that allowed OU to get back into it. Hopefully this will be a lesson to the Jayhawks that they always need to give a full 40 minutes' worth of effort on defense.

My favorite play of the night was when it looked like Quentin Grimes was about to have the ball stolen from him, only for the OU player to lose control, Grimes to dive in and steal it back, and get it to Devon Dotson. That was straight-up gutsy!

Lack of defense was not what let the Sooner's back in the game in the second half, it was pathetic offense. The defense got the stops they needed to but their offense couldn't capitalize most of the night. It appears the Jayhawks are layup or nothing on offense. I think I would just pack my defense in and dare them to beat me with outside shooting.

Yes but OU's pathetic offense was almost as bad as ours. Statistically they shot better from behind the arc but OMG they were missing so badly. At least ours were hitting the rim.

No question Bryce, great hustle by Grimes that paid off but the behind the back dribble on his knee by Dotson was an exquisite display of ball handling.

I agree with Joe. Put in a box and one, stick to Vick like glue, pack it in around Dok and say, OK the rest of you beat us!!!

Quen is coming on strong the past couple of games. We need that for sure! The other good take away is that we seem to have an answer with going to the 4 guard offense when teams go to the hack-a-dok. I would prefer that dok somehow learn to shoot FT's better so we could keep him in, but if not, the Dedric down low has been productive.

Other than about the last 10 minutes of the first half, that was a tough game to watch. KU went through stretches where they couldn't throw the ball into the ocean if they were standing on the beach. Garret still can't shoot, D. Lawson was having a hell of a time getting anything to fall, what, 6/16, about 30% mostly from under 10 feet. Vick was mediocre most of the night, and Dok didn't score the second half. Fortunately, the two freshmen guards played better, still not up to their potential, but enough better to get the win.

It's going to take a much better shooting night (afternoon) to knock off Iowa State on Saturday.

Personally, after the slow start in the first half, the guys played the best they have all season for the rest of the half. Once OU got up 7-2 was it, the men looked far superior to OU. This is not close to the best they can be by any means though. Just think if Adidas didn't cause the troubles how deep this team would be.