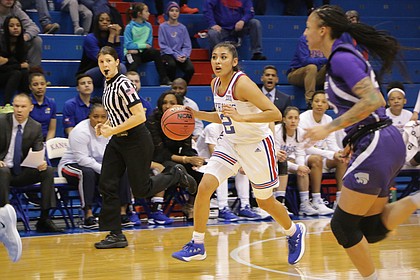 Even though Kansas senior Kylee Kopatich was once AAU teammates with Kansas State junior Peyton Williams, she didn’t smile for her when she made a basket in the final seconds of the game to erase what was once a nine-point lead for the Kansas women’s basketball team.

With 18 seconds to go in regulation, Kansas State coach Jeff Mittie took a timeout with the Wildcats down by two with the ball. Freshman Christianna Carr made the pass to Williams to force overtime.

Kansas eventually fell to K-State, 72-62, in the extra period Wednesday night at Allen Fieldhouse. The Jayhawks (12-9, 2-8 Big 12) split the season series with the Wildcats after a win at Bramlage Coliseum earlier in the year.

“We didn’t want (Williams) to get the ball,” KU coach Brandon Schneider said. “I’m more disappointed that we didn’t call timeout as soon as we had the ball. My understanding is one of the officials is designated to look at the bench in those situation and we were calling timeout there. Obviously, the players are much closer and we got to learn from that because that’s one of the things we leave each huddle with.”

As a team, the Jayhawks finished with 14 assists on 23 field goals. Kansas only missed on three tries to net a 74 percent clip on 11-of-14 free throws.

In a game that saw four different lead changes and nine ties, K-State’s (14-9, 5-6 Big 12) largest lead of the game didn’t come until the end of overtime. In regulation, Kansas didn’t allow K-State to get up by more than 2 points.

Tied after the first media timeout, the Jayhawks and Wildcats both got off to the start that they wanted. Kansas took a lead at the half, as Kylee Kopatich snuck around the corner to take an open 3-pointer to go up by three. Christalah Lyons scored another four points in transition, and the Jayhawks finished the run up six at the end of the quarter, 27-21.

After a poor performance from deep, Kansas surrendered the second quarter, 13-7, to the Wildcats. K-State scored a late jumper by Kayla Goth to tie the game at 34-34 at the intermission.

After her hot start in the first quarter Lyons entered the half with a pair of fouls, and ended the game with four. She scored 15 points along with three KU players, who netted double figures.

“She’s a lot easier to guard on the bench, I can assure you,” Mittie joked after the game.

In the third period, Marianne De Carvalho hit a 3-pointer after a steal by Kopatich on an assist from Brianna Osorio to put the Jayhawks up 47-40.

The Jayhawks maintained their lead until Williams made a layup in the final seconds of the game to force overtime tied at 60-60.

“I think we would have had a full second to shoot it (if we called timeout),” Schneider said. “When you can advance it, we’ve got all kinds of things we practice in those situations where we feel like we could have a decent look at the basket.”

Williams’ basket marked the end of a 7-0 run to finish regulation, but the Wildcats didn’t stop there. The Jayhawks only scored once in overtime, going 1-of-9 from the field in the free period in the loss.

I guess Schneider and Self can compare notes about how to not win games when leading near the end of regulation. Watched much of the back and forth game, and unfortunately this experienced KU team could not close out the game. Disappointing loss and bad week overall for KU during the sunflower showdown.

Just a terrible loss; how do you blow a 7 point lead in the last 2 minutes? It’s unscceptable frankly; and this coach better figure it with 8 league games left. Must wins are TTech, TCU; and then figure out 2 more wins among OSU, OU, WVU and ISU. We talk about not having Washington available; we lost to TTech with her. Before the season, I said minimum 6 or 7 league wins for this coach to keep his job; to show actual program improvement; the clock is ticking.

Just another mind numbing loss in a endless string of losing conference seasons. It is way past time to get a real coach in here.

I ran across this game in the second quarter and watched it until the end. I have been a supporter of Brandon since day one and knew it would take several years to get his recruits in and the style he wanted to implement, so I have been patient. In watching that collapse, I’m now beginning to scratch my head at some of the decisions during the late game. I do have a question, as the women’s rules are slightly different from the men’s.

How many fouls can you give before they start shooting the one and one? If we had a foul to give, why not foul Williams with the one second remaining on the clock? They wouldn’t have been able to throw it in and get a good shot off. The K-State zone made our offense look terrible most of the night. That’s on the coach, unless our ladies just couldn’t execute what Brandon wanted them to run.....that also would be on the coach.

The leash just got shorter in my opinion

Another coach chosen by Zengy who should never been hired. Zengy's gifts just keep giving.

Offense now fun to watch. Working ball to inside with jump shots. Now using forwards. Robinson having season she deserves. Relying on 3 weave with 3 point shots and uncontrolled drives to bucket - ugly. Coach Schneider's continuous comments to refs distracting and unproductive. Theatrics over head ref's interference with the ball uncalled for. Coach Schneider seems to think he is being homered at home.

[“]. I don’t normally agree with you, but you are spot on. There were multiple times......multiple possessions in a row where quite a few high school girls teams could have executed better. It was actually embarrassing