Stanford, Calif. — The road sure is a lot friendlier when it sounds like home.

With a couple of thousand blue shirts, relentless Rock Chalk roars and even a replica “Beware of the Phog” banner filling Maples Pavilion on Sunday afternoon, fifth-ranked Kansas bounced back from last weekend’s road loss at Villanova with a convincing 72-56 victory over Stanford on the Stanford campus.

With Stanford students still on winter break — which meant no band, no cheerleaders, and even no famed Stanford tree — KU fans packed the 7,000-seat arena and gave the Jayhawks a boost from start to finish.

It didn’t hurt, of course, that the Jayhawks (10-2) were stellar at the start of both halves, eliminating any hope the home team had of pulling off the upset.

“I’m sure other programs have it, but I don’t know that anybody travels to everywhere better than we do,” KU coach Bill Self said after the victory. “I don’t know who travels better than us. But I don’t think it’s people who travel as much from home. I think it’s people in this area that get a chance to go see their team. And we’re very appreciative of that. You don’t get that at many places. We’re very spoiled.”

The pseudo-home-court advantage showed up well before tipoff. Both Marcus Garrett and Tristan Enaruna told stories of talking with teammates about how Sunday’s matchup “felt like a home game” because of the roar that surfaced when they took the floor.

“That was great,” Enaruna said. “When we walked in we were already saying to each other it sounds like we’re playing a home game. That’s crazy, and that’s just what it brings when you have such a great fan base.” 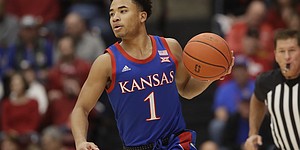 Not in any kind of mood to let their adoring fans down, the Jayhawks raced out to a 20-4 lead on the strength of their lockdown defense that kept Stanford off the board until the 12:11 mark of the first half.

Even when the Cardinal finally broke their scoreless drought, 4 of their first 6 points came at the free-throw line and they did not bag their first field goal until 8:08 remained in the half.

“They had three or four open looks to start the game,” Self said. “So (our play) wasn’t as good as the score. But both teams were so inept offensively that I’m sure it was a hard game to watch. But we did defend and rebound.”

Had either of those numbers been even just a little higher, Kansas might’ve thrown the knockout punch by halftime.

The run that buried Stanford didn’t come until the second half, but a late spurt just before the halftime buzzer came pretty close to doing it and also served as a sign of what was to come.

Leading 25-18 in the final minute of the half, the Jayhawks staved off two attempts by Stanford to cut the lead to 5. After the second one failed, Enaruna raced the ball up the right side of the floor and tossed ahead to senior Isaiah Moss in the deep corner, who caught and shot to beat the halftime buzzer by a couple of seconds.

That put Kansas back up by double digits on the way to the locker room and helped snatch back any momentum Stanford had stolen.

“I felt like we controlled the whole thing,” Self said. “But (a 7-point lead is) only three baskets. So I think it was important that (Moss) made it, and then he made the 3 to start the second half and we were on our way after that.” 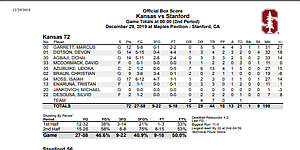 At one point early in the second half, Moss, who finished with 17 points to lead the Jayhawks, hit three 3-pointers on three consecutive KU possessions, all in 65 seconds to turn a 9-point lead into an 18-point advantage.

“It felt great,” Moss said of the spurt. “It’s been a while, but I’m glad to be knocking down shots and my teammates got me the ball.”

Asked if anything changed in the week between the Villanova loss and Sunday, Moss said he was “just a little more relaxed, not thinking about it as much, just letting it go.”

That’s exactly the mentality his teammates want him to have the rest of the season.

“He was really good,” Enaruna said. “I think he can do that even more often. Sometimes it looks like he’s kind of hesitant to shoot it. But today, after he made a couple, he could feel it and he knew he just had to let it go. That really worked out.”

It was particularly important in this one because of the fact that the Jayhawks got just 4 points on 2-of-5 shooting from their three big men.

Despite senior center Udoka Azubuike’s 1-of-2, 2-point outing, Self called the game “one of the better games he’s played,” largely because of his 13 rebounds, seven of which came on the offensive end.

Those numbers helped pace KU to a 44-25 rebounding edge (15-4 on the offensive glass) and further illustrated the importance of Moss shooting 4-of-7 from 3-point range and freshman Christian Braun knocking in 3 of 4 from behind the arc, as well.

“We had to have somebody make some shots,” said Self, whose team shot 46.6% from the floor for the game and 40.9% from 3-point range. “Having our bench guys combine to make seven 3s, that’s something that we welcome.”

As good as the Jayhawks were from distance — after making 3 of 14 3-point tries in the first half, KU hit 6 of 8 in the second — it was his team’s defense that left Self smiling the most on Sunday.

KU forced Stanford leading scorer Oscar da Silva into eight turnovers, and the Cardinal coughed it up 19 times as a team. Beyond that, Self said the Jayhawks played good team defense and used Azubuike as the anchor for all of it.

Kansas now returns to campus with the start of Big 12 Conference play looming. The Jayhawks will host West Virginia at 3 p.m. Saturday at Allen Fieldhouse to kick off their quest to bring a Big 12 trophy back to Lawrence.

Bill Self breaks down KU’s 72-56 win at Stanford by KUsports.com

Man, if you had told me that we would win by 16 points with Udoka only scoring one basket all game long, I'd have said you were crazy!

Also, if I ever again see a half of basketball as sloppy and poorly played as the first half, I may have to resort to medicinal marijuana to dull the pain!

Same here but he cleaned up on the glass.

Moss gets the game ball on that one.

How about both? :) Bench won this game for us. Without knocking 3s, it would've been a much closer game.

According the Jayhawks Facebook page, the return jet flight lost an engine and they had to go back to San Jose. Everyone is safe. Wow.

1] Stanford was 11-1 and playing at home and Kansas ended up dominating....and we still haven't played any where near our potential yet!!

2] I am afraid that it is going to get to the point that our opponent will foul DOK every time he touches the ball and, one, force Bill to get him out of the game or, two, trade one or no points for two or three.

3] Every time I see Braun play, more and more, I get the feeling that Kansas made the recruiting steal of the century.

5] I think KU might struggle to go 14-4 in conference this year while still playing great.

6] I was in Lawrence over the weekend celebrating Xmas with my brothers and went across the campus a couple of times. Christmas Break on The Hill was like walking through a zombie movie set......no one in sight, any where!!

7] Rumor has it that the ground crew guy was a Kansas State grad. All kidding aside, been on a flight like that and suddenly everything you think is important boils down to your life and your loved ones. So glad this ended well.

Did Jerod come up with the blueprint to stop us in the paint? Held our bigs to 2 points on 1 of 3 shooting and I didn’t see Devon drive the lane as much as he usually does.

they did really pack the paint and it looked like Dok was almost tripled teamed once the ball got to him. It was effective in limiting his scoring, but sure gave us open looks on the 3 ball, which we finally hit and a great pace. Sort of a pick your poison for them.

Why do we have a referee that has a basketball face? :)

It’s nice to see Dok’s growth over the past couple years. I remember people here lamenting his lack of post presence even though he had so little experience. It’s great that he’s continued to work so diligently on his game. The FTs will come with game time just as it has in practice though few get to witness that growth.

Saturday should Finally be a really fun game for the frontline. WVU is probably one of the very few teams that can roll out multiple old-school bigs. Roundball beast-mode.

The Freshman are in for a rude awakening if they think Maples was a “road game”. CU is no longer on our schedule. And to think that Hilton comes at the very beginning. Is there a more challenging road venue in the conference - other than the Phog?