Head coach Brandon Schneider cleared 450 career wins as Kansas women’s basketball held off Saint Louis in overtime, 68-60, in Chaifetz Arena on Sunday afternoon. The Jayhawks improved to 10-0 with one nonconference game remaining, while Saint Louis fell to 7-5 on the year.

Freshman guard Zakiyah Franklin scored 19 points on 8-of-14 shooting, including 2-for-3 from 3-point range. Behind Franklin were sophomore guards Aniya Thomas and Brooklyn Mitchell who each finished with 15 points. Thomas had six rebounds, while Mitchell had five rebounds and five assists.

The Jayhawks got out to an early 9-3 lead to start the first quarter, but the Billikens answered with an 8-0 run and went on to take a 16-13 lead into the second quarter. Saint Louis outscored Kansas, 12-8, in the second period. 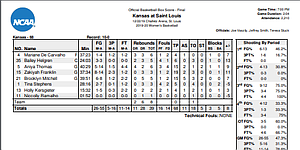 Kansas closed the gap in the third quarter outscoring Saint Louis, 25-15, and ended with a 10-2 run in the last 2:08 to take a 46-43 lead into the fourth quarter. The Jayhawks and Billikens went back-and-forth in the final frame, but Franklin eventually sent it to overtime with a bucket at the 1:04 mark in regulation.

It was all Kansas in overtime, as the visitors posted a 10-2 edge in the free period. Thomas scored 4 points in overtime, including a basket to give the Jayhawks a 62-60 advantage at the 2:54 mark. Franklin scored the final 4 points in the last 39 seconds to help KU pull out the win.

Schneider is now 34-17 in the months of November and December while coaching at Kansas.

Exciting game! Nice comeback win on the road, showing a lot of poise in the 2nd half and overtime. Merry Christmas, Jayhawks.

Agreed. They haven’t exactly played top 50 caliber teams, but as young as they are they need to win games, build some chemistry, start to gel as a team, and gain some confidence. I would say they are off to a good start. It really needs to equate to some BIG XII wins this year.....if Brandon wants to keep his job.