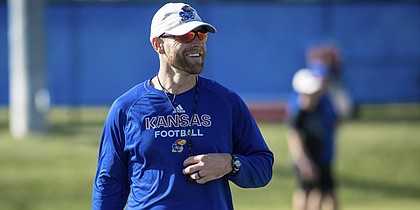 The way Brent Dearmon described the amenities, he worked in a closet with no windows when he first became aware of California prep quarterback Jalon Daniels.

Dearmon hadn’t been at the University of Kansas long at that point. At the time he was a senior offensive consultant grinding behind the scenes, looking for prospects.

He didn’t know back in February he had just found a quarterback for the Jayhawks’ 2020 recruiting class, nor that he would become KU’s offensive coordinator and QBs coach, setting the stage for him to land Daniels on the first day of the December early signing period 10 months later.

“I’d watch quarterbacks all day and fell in love with his tape,” Dearmon recalled earlier this week, while discussing the first time he saw footage of Daniels, a 6-foot, 200-pound QB from Lawndale, Calif. “And secretly kept in touch with him and and followed him, and when I finally got the OK to pull the trigger we went ahead and pulled it.”

Dearmon liked the way Daniels got the ball out of his hands, created and could improvise in the backfield.

The only complication in the process was that Daniels had committed to another program, Middle Tennessee State, in August, ahead of his senior year at Lawndale High. Dearmon didn’t become a full-time coach with the Jayhawks until October, when head coach Les Miles fired offensive coordinator Les Koenning and promoted Dearmon to take over.

Once Dearmon was able to recruit Daniels himself, he made a push to get the California prospect to KU.

“You know, I think it came down here last minute of him making a decision between a place that he was committed to for a long time. And I was battling and fighting for him,” Dearmon said, noting he made sure the recruit could tell how much he wanted the QB to join the Jayhawks. “And I think last minute he kind of decided that he wanted to play Big 12 football. So it wasn't that he was committed to us behind the scenes for two months or something.”

Once Daniels told Dearmon on the phone earlier this week that he would indeed sign with KU, Dearmon thought about doing a backflip, but the coach jokingly shared that idea was followed by a realization the action could lead to a broken neck.

“But I was really excited, from being able to talk with him and (Daniels’) mom and dad (Starkey and Tyrone), and just to hear their excitement, as well,” Dearmon shared, noting that some KU players from California also helped him find out more info about Daniels during the recruiting process.

Watching Daniels in person recently, Dearmon said it was important for him to see the ball come out of the QB’s hand up close, but the coach also was able to witness Daniels’ leadership ability. The young QB’s mobility also made him an intriguing prospect.

“Just the direction that we've went down in our O-line spot, we knew that the pocket passer’s kind of fading away in football,” Dearmon said. “And Jalon’s ability to move and create just enamored us.”

So did the QB’s mind. Dearmon pointed out both Air Force and Army offered Daniels a scholarship, too. The KU assistant said that happened for a reason.

“He's a really intelligent kid, wants to be an engineer,” Dearmon said. “So I like coaching kids like that.”

Are non-coaches allowed to keep in touch/contact recruits - secretly or otherwise?

Jalon does have a nice video. Probably too raw to think of him stepping in as a freshman but definitely a nice prospect for down the road.

If Feleipe joined the team for the spring, would he count against the 25 player limit?