Carter Stanley was not perfect during Saturday’s 24-17 KU victory over Indiana State. But the decision to use him was.

Decisions like those win games. And even though Saturday’s victory had its share of warts, how Miles and company handled the quarterback position was not one of them. 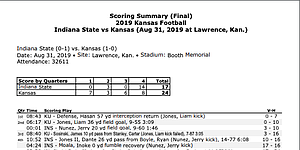 It’s still far too early to know whether Miles’ time at Kansas will wind up successful. But it’s never too early to see concrete evidence that the head football coach knows what he’s doing. Kansas fans saw that on Saturday. And boy was it refreshing.

“It’s definitely important,” said senior running back Khalil Herbert of Miles picking a QB and sticking with him. “It puts the whole offense behind him. They stuck with him today and it worked out well.”

Despite keeping the identity of his starting QB a secret and even hinting that he might play multiple quarterbacks in the opener, Miles went with Stanley to start, stuck with him through three turnovers and then watched him rally the Jayhawks to victory with a clutch two-minute drive in the final five minutes that turned a 17-16 deficit into a 24-17 victory.

“That commitment means a lot to me,” said Stanley, who finished 20-of-29 passing for 241 yards and two touchdowns, including the game winner to Daylon Charlot. “I’m very thankful for that and I think I have to continue to do some things to prove to them that I can handle those situations.”

Stanley was at his absolute best on that last drive, putting a few great throws out there and letting his talented receivers make plays from there.

“We didn’t blink,” senior tight end James Sosinski said of his team facing a 1-point deficit late. “We just went out there with confidence and we knew that (Number) 9 was going to lead us down there.”

Who knows if Stanley will hold onto this job for all 12 games of the 2019 season. But if he does, maybe that last drive provided a glimpse of something that could work with him under center.

Instead of asking him to manage the game and stick to a script, let him run around, inject some life into the offense — and audience — and see if those plays that saved KU in this one can become a regular thing.

The Jayhawks, who played Saturday’s game without all-Big 12 running back Pooka Williams, have to and will run the ball a lot this season. But their quarterback has to be able to make plays, as well, so other teams can’t load up against the run.

Stanley did that on Saturday when it mattered most, and that performance came on an afternoon when he faced a steady diet of pressure right in his face and had to overcome a couple of incorrect calls from the sideline.

Miles said cleaning up the miscommunication that cost them Saturday would be “easy to fix.” He also said Stanley was his quarterback moving forward.

“You betcha,” Miles said. “Was he perfect? Absolutely not. But he was good enough and (enough of a) leader to win. … I think he’s a team guy. He wants for the team. Those thoughts, they carry you a long way.”

On Saturday, those thoughts, along with his actions, carried Kansas to victory and made the Jayhawks 1-0, leading to both smiles and sighs of relief on the faces of everyone from the casual fan all the way up to the athletic director.

KU football is in no position to decide whether its wins need to be pretty. You take them. However they come. And for just the seventh time since Stanley became a Jayhawk back in 2015, the gritty senior from Vero Beach, Fla., walked off the field Saturday on the winning side of a coin that has seemed double-sided against the Jayhawks for far too long.

Stanley made a few throws that led to that outcome. But Miles made sure he was in position to do so.

Let’s see what else the two can do from here.

Senior QB Carter Stanley on starting and win over Indiana State by KUsports.com

Senior RB Khalil Herbert on defeating Indiana State: “A win is a win” by KUsports.com

Hasan Defense on KU’s two takeaways against the Sycamores by KUsports.com

I'm still betting that we'll see MacVittie under center for the Coastal Carolina game so the coaches can then evaluate both QB's in game situations. Given how close the QB competition was, that just makes sense to me. Plus, that would not let Boston College key in on just one QB in their planning.

I’m happy for Carter and the rest of the team. I know how much the team respects Carter and how much he cares too. Glad to see him get a real shot and convert when it counted.
I’m disappointed that the run game - and O line - looked worse than I expected but hopefully Pooka magic can invigorate it next week.

Was there an announcement of the crowd size?

Carter has all the tools, they just need to call better plays for him. Running up the middle on 1st and 2nd down was not working. Maybe that will be a different story with Pooka available.

Was surprised on a few things. Smaller crowd for this game than expected, given the relative excitement about Miles and his recruits. The play of Carter and the reluctance to pull him after all of his mistakes. The ineffectiveness of our offense. Overall though the crowd had fun and it was a beautiful day for a game. Glad I could witness Miles first game, the enthusiasm the team showed and the Gatorade girl working her arse off!

I'm with Dale on this one. Think they started Carter as a show of respect to the Senior but will transition to MacVittie for next game. The addition of Pooka should surely make a difference too.

Interesting concept. Say they start MacVittie next game. Coastal Carolina isn’t as good as Indiana State. Plus you have Pooka playing. If we beat them handily, it doesn’t necessarily mean MacVittie is a better fit or quarterback. Be interesting to see how Miles and Co handle next week

I think our coaches are smart enough to look at game management, clock management, decision making in unexpected situations, etc. I doubt final score would matter much in that respect. Nor would defensive performance.

All I wanted was a “W”. Compared to last several seasons, I thought KU tackled better and looked faster/quicker. I don’t know how the QB situation will play out but Miles knows what he wants.

As Al Davis always said, “just win, baby!” Ugly or pretty doesn’t matter, because recruiting help in on the way.

I'm looking for improvement over last season. One thing that stood out to me last season was how little time the QB had before he had to be rid of the ball or go down. This game the QB had a more reasonable amount of time. There were exceptions of course, as there will be in ever game, but I thought the O-line performed much better this season than last. Just my opinion but that kind of stood out to me. The defense also looked a lot better than I expected, given how much we lost from last season and how little experience they have at this point. Again, there were exceptions, but overall I was pleased that there seems to be positive progress. Hopefully the offense will settle in as well.

I'm trying to think if any of the prior coaches relied on the current roster rather than bringing in their own guy and handing them the job. Cryst, Heaps and a couple others standout. MacVittie still had the inside track, but the fact he was likely just out played, seems interesting to me.