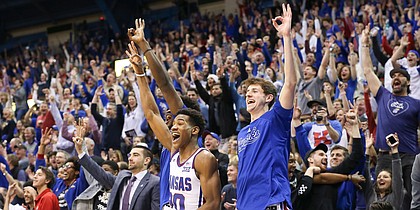 Luinstra, who was a member of the Kansas men’s basketball team for one season, announced via his personal Twitter account that he was transferring to the University of Central Missouri. He will be immediately eligible to play during the 2019-20 season after transferring from Division 1 to Division II.

In his first collegiate season, Luinstra played 11 minutes in 10 games for the Jayhawks.

Luinstra came to KU after averaging 19 points per game and earning all-state and Sunflower League Player of the Year honors during his senior season at Free State.

The 6-foot-2, 155-pound shooting guard earned all-league honors twice with the Firebirds. Luinstra set Free State’s single-season scoring record by recording 456 points during the 2017-18 season while leading the Firebirds to the Class 6A state title game. It marked Free State’s first trip to the state championship game in program history.

Excited to announce that I will be transferring to play basketball at the University of Central Missouri! #GoMules pic.twitter.com/iT257x8mLr

Were all the other possible mascot names taken?

The mule has a place in Missouri history...

Being from Warrensburg, this is great news. Welcome Garrett!

UCM Basketball is another "Phog Built" teams. I would love to have a weekend in the preseason tourney between the Phog's teams: KU, UCM, Haskell and Baker.