A federal investigation into college basketball and a lawsuit from a former football coach in his first five months on the job presented unusual challenges for Kansas Athletic Director Jeff Long.

But, still, the task at the top of Long’s mind is the same one that has been a traditional worry for any KU athletic director.

“To be candid, where I’m most concerned is filling the stadium,” said Long of David Booth Kansas Memorial Stadium during a recent sit-down with the Journal-World in which he reviewed his first full year as KU’s athletic director. “Then, when the stadium’s more full, being able to provide the concessions and the restrooms and the things that our fans need is important. It’s a big debut. We want to show them a different experience and we want them to come back.”

Several of Long’s first 365 days at Kansas — his first day on the job was Aug. 1, 2018 — were spent focusing on the football problem that has plagued the university for the past decade.

Those familiar with the inner workings of college athletics often refer to Year 1 of a new regime as an ongoing assessment. But Long preferred to label his work in the past 12 months as “setting the tone.”

“It isn’t all assessment,” he said. “We’re assessing as we go, but we’re also making substantive changes that we need to make.” 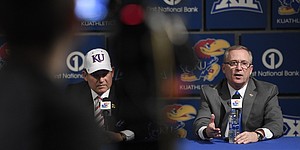 “To me, that’s the obvious reason why I’m here,” said Long of fixing football. “We’re not just a one-horse program and we can’t be going forward.”

Elevating the football program, Long believes — through better coaching, more talent, better facilities and a stronger commitment from all parties involved — will “raise all boats” and benefit the university as a whole. The concept of athletics doing its part to aid the overall mission of the university is important to Long, he said.

But he also was careful to point out that his focus on football won’t come at the expense of KU’s blueblood men’s basketball program.

“Bill Self and the basketball program are always going to be out front,” said Long, noting that he and Self had not yet engaged in talks about a contract extension for the Hall of Fame coach, but that he believed those days were coming. “We’re never doing things with football that are going to disadvantage basketball. But for the benefit of Kansas, our athletic department and the university, football needs to become a player. That’s been the biggest challenge coming in, and we’ve got a lot of work to do.”

Some of that work, like giving Miles the money and manpower needed to build, has already begun. And more, like plans to overhaul Memorial Stadium, remain in the distance.

“Football isn’t going to become great overnight,” Long said. “And it’s not all about the big donors. For our football team, it’s really about the fans getting in the stands. … It’s a beautiful setting, so we’ve got to create some excitement in there.”

Long’s second year at KU also will involve keeping an eye on legal issues that are brewing just outside the athletic department’s gate.

The men’s basketball program figured prominently into a federal investigation into corruption in college basketball recruiting. And the athletic department itself was sued by former football coach Beaty in a dispute over his $3 million buyout. Long also helped spearhead an appeal that resulted in the reduction of forward Silvio De Sousa’s NCAA suspension from two years to one. 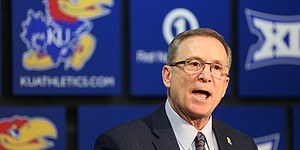 “To have all that falling at one time, — new AD, allegations, football assessment, coaching search and more— all of those things in that first five months on the job, was a lot,” Long admitted.

Neither legal matter had reached the point of closure as the Long era flipped from Year 1 to Year 2 on Thursday.

In mid-June, an NCAA official in charge of regulatory affairs said six schools soon would receive notices of allegations that carry Level 1 penalties and that two of them were “high profile” programs. To date, only North Carolina State has received an NOA.

Long said KU had dedicated “a tremendous amount of time reviewing what we’ve done, what actions we’ve taken, what transpired,” and added that he sensed the NCAA’s evaluations were coming to a conclusion.

Whether the findings lead to the foot of Mount Oread remains to be seen, but Long said KU officials were ready for anything.

“We’re prepared to respond whether something comes or doesn’t come,” Long said. “The time that Coach Self has put in, his staff, our staff, our compliance program, our university attorneys, outside attorneys... hours and hours and hours of time spent planning and preparing. It is a process, a long process. And we are well prepared.”

There were, of course, moments of pride for Long during the past 12 months.

Beyond the notable accomplishments of women’s tennis, women’s soccer, men’s basketball, track and field and others, Long pointed to a joint effort with KU Chancellor Douglas Girod, the University of Kansas Health System and LMH Health to create the Kansas Team Health partnership as his proudest accomplishment.

Long said the new format of student-athlete healthcare at KU, which is believed to be the first of its kind at the major college level, was “true to our core belief, that the health, safety and wellbeing of our student-athletes is our No. 1 priority.”

Another moment Long lauded from Year 1 was the finalization of the 14-year, $196 million contract with Adidas that sat on the brink of completion for nearly 19 months before being signed in late April.

“It had been announced, it was generally done and this was another instance where the chancellor and I worked together and took the appropriate steps to make sure that this was the right deal for Kansas,” Long said. “It was months and months of working and talking with Adidas and making sure we both understood each other and how we expected the relationship to go forward.”

The reason for the delayed timeline had everything to do with the involvement of a few former Adidas employees in the college hoops scandal. And Long said the contract “absolutely” could have been signed sooner if not for KU’s desire to look deeper into the partnership. 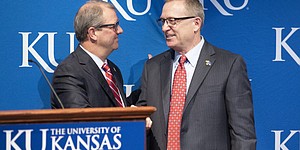 “The fact that they had two employees indicted and convicted played a great deal into it,” he said. “We wanted to make sure we understood our partner even better than we did before and make sure that we were aligned properly. And we took our time to do that.”

KU officials, however, largely have been mum on what their review of Adidas found. In April, when the deal was finalized, Long said, “we have commitments from Adidas to work with us to help change the nature of college basketball.”

When asked in April by the Journal-World for details about what Adidas had promised that made KU comfortable moving forward, KU officials declined to provide any details.

Before coming to Kansas, Long served as the AD at Pittsburgh for five years and at Arkansas for 10, along with working as an associate AD at three other Power 5 schools.

He believed his background had prepared him for anything KU could throw his way.

“There’s always going to be challenges,” he said. “But I think there were more at the beginning of this tenure than usual. And that makes you come together quicker and forces you out of your comfort zone earlier.”

It also caused Long to put other priorities that are key to his philosophy of running an athletic department on the back-burner.

“Because this first year was so crowded with many other things that took my attention, I, in the first year, have not developed the kind of relationships I hope to have with every one of these coaches,” he said. “That’s a place where I’m deficient.”

His experiences in the past 12 months, both within the department and while engaging with Kansas fans, led him to believe the relationship part of the picture is an even bigger deal at KU.

“I think what gives us a great chance at Kansas is, when I talk to fans and supporters and alumni, there’s a feeling of love and pride that’s different. It’s different here,” he said. “It’s just deeper. It’s just down-inside-coming-out love. That gives me excitement that we can meet this challenge and we can do more and we can succeed at a higher level.”

As for his goals for Year 2, Long said he realized that hearing an athletic director talk about raising money can seem trite.

To that end, Long views growing the Williams Education Fund as paramount to the future success of Kansas Athletics.

He expressed concern about the overall size of KU’s primary donor group while noting that the Williams Fund’s per-donor dollar amounts were comparable to or better than other major college athletic departments.

“This will be an important year, and we’ll have a lot of things to work through. But, with a year under my belt, I’m better prepared to work with everyone on those challenges.”

any news on the NCAA basketball investigation. Be gone with it!

Is Auburn the second high profile program? Haven't read anything official from the NCAA but according to Auburn folks they believe they will receive an NOA.