Girod: KU has changed basketball procedures in wake of FBI case; 'We have to make sure we do it right going forward' 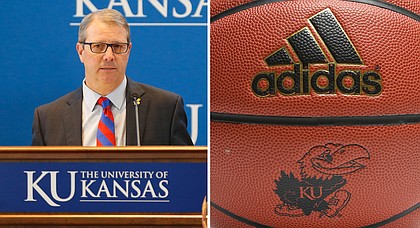 KU Chancellor Douglas Girod acknowledged Wednesday that internal procedures of the men’s basketball program have changed after a pay-for-play scheme ensnared two KU players, saying KU has to “make sure we do it right going forward.”

Girod said changes have been made regarding which individuals are allowed to have access to the men's basketball program and its staff, but he did not elaborate on what those changes involved.

Girod also declined to provide specifics about what Adidas officials told University of Kansas leaders that made the university comfortable with signing a 14-year extension with the company after three of its employees who dealt directly with KU were convicted on fraud charges.

“I’m not going to speak for them,” Girod said of anything Adidas may have said. An attempt to reach a spokesperson for German-based Adidas wasn’t immediately successful Wednesday evening.

When asked if the public would ever get details about what convinced KU to be comfortable moving forward with Adidas, Girod said: “I don’t know.”

Girod, though, did confirm that KU has taken some steps to change how its basketball program operates in the wake of the scandal. KU faced questions on Wednesday about how one of the former Adidas employees managed to get such close access to the men’s basketball program.

T.J. Gassnola admitted in federal court that he had paid the families of two KU basketball players, current player Silvio De Sousa and former player Billy Preston. Evidence from a federal fraud trial showed Gassnola had easy access to both KU coach Bill Self and assistant coach Kurtis Townsend. That’s despite the fact that Gassnola had a past that raised many red flags about NCAA compliance issues and legal troubles. Gassnola in 2012 was part of a suspension of AAU teams handed down by the NCAA, who believed Gassnola and others had an inappropriate relationship with an NCAA agent. Earlier reporting by the Boston Globe found Gassnola had several criminal convictions and also unearthed other allegations of Gassnola improperly paying potential college recruits.

“They have put changes in place to more closely monitor who has access,” Girod said of the athletic department and its oversight of the basketball program.

Girod, however, stopped short of saying he was concerned about how Gassnola was able to have such close dealings with the KU basketball staff.

“I’m not going to judge my predecessors and how that played out," Girod said. "I just know we have to make sure we do it right going forward.”

Girod began his role as KU’s chancellor in early July 2017. Preston made his commitment to KU in November 2016 and De Sousa made his in late August of 2017.

Do your homework Chad.

The quoted statement is inaccurate, distorts Gassnola's testimony and the lens on the NCAA's punishment of Silvio De Sousa, and libels Silvio and his family.

Gassnola testified he paid Billy Preston's mother, but he denied ever giving anything to Silvio or any members of Silvio's family. Gassnola did testify he gave $2,500 to Silvio's legal guardian Fenny Falmagne (who appears to be a professional legal guardian for foreign college basketball players playing in US high schools in Florida, as reports were Silvio was not his only ward). Gassnola also testified that until the FBI investigation news broke he was ready to (but never did) give $20,000 to Falmagne to help him pay back a U of Maryland booster who allegedly (there's been no court admissible evidence of it) gave Falmange $60,000 to persuade Silvio to go to Maryland. Silvio and his family have always insisted that they knew nothing about any of this, got none of the alleged money, and that his decision to attend KU is evidence that Falmagne exerted no influence on where Silvio chose to go to school.

Silvio got dinged by the NCAA under the "Cam Newton" rules, which maintain that it doesn't matter if the student-athlete does or does not know what his or her family members are doing in regards to accepting money or other benefits to get that student-athlete to a certain school. When that happens, the NCAA deems the student-athlete as responsible. Those same rules also extend the relationships to legal guardians, and it does not matter if the student-athlete or the family see any benefit at all, as the NCAA deems the guardian to be acting as an agent, which basketball student-athletes are not allowed to have. Still, the fact that Silvio did not go to Maryland, and that the NCAA has taken no action against Maryland (lack of institutional control extends to boosters, as KU saw in the Darnall Jackson case) despite the allegations of Falmagne getting $60k to persuade Silvio to play there, makes the NCAA's 2 year punishment, which specifically cites the $60K as the reason for its length, extremely draconian.

As I step down, I repeat my main point of contention -- Gassnola never admitted tp paying Silvio or his family anything, he admitted to paying Falmagne. The quoted sentence is therefore not accurate in regards to the De Sousa family and Gassnola's testimony.

YAWN!!! How much are we going to try and spin this? the damage has been done, lets move on.

Don’t read it if it bores you. I’m not spinning anything. Lawhorn made a factual error, which is easily confirmed by reading the reported testimony. I’m correcting that error.

Chad maybe your next story should be to document what came out of the first FBI trial, so that we all know all the facts.

The whole point is that the NCAA does not have to give you a day in court.
If they decide to make an example out of you, or just want to look tough, you are going to
take it.

I for one would just like to see an open declaration, and proof. I doubt if that will ever happen.

Is it no longer, innocent until proven guilty in this country?

It is good that KU is changing some procedures, perhaps the NCAA should change some of theirs.

I'd just like to say, I support the complete abolishment of collegiate athletics. Let the pro teams create youth development programs like European soccer clubs do.

Who would pay for development of the players playing sports that feed our Olympic system?

Long specifically mentioned the need to abide by 'the law of the land.' H.R. 1804 will become the 'law of the land' in early 2019, putting an end to this nonsense created by the NCAA. It's a damn good thing KU secured a great long-term partnership. https://www.congress.gov/bill/116th-c...

Point of order, Madame Speaker! The linked page for HR 1804 indicates that the bill was introduced in March 2019 and the tracker marks it as still in the House Ways and Means Committee as of the last update to that web page. If it becomes law -- and it has a long way to go to get there -- history tells us it won't be until much later in 2019, and therefore will almost certainly not go into effect until some time in 2020, most likely with the beginning of the next new fiscal year of the affected entities. (At one point earlier in my life I was a tax accountant).

Note also that the way the text reads it probably won't have as much effect on the "pay to play" shenanigans as we think, as it addresses a related but different area of NCAA bylaws.

Still, an interesting bit of information, Suzi, thanks!

I meant to say early 2020. Early 2019 has already passed us bye. This bill will go quickly as it has bipartisan support and Trump has already indicated he will sign it. The bill allows players to maintain rights to their likeness, which effectively means they can sign shoe deals or any other 3rd party deal, like the rest of us in the USA. https://walker.house.gov/media-center...

By the way, my local congressman...Brady was the Chair for Ways and Means. He's helped me a lot with several projects.

I don't agree for reasons that seem obvious to me. First, athletics are a great opportunity for students who wouldn't otherwise be able to go to college right out of high school. What I think should happen is not abolishing it. They should say, if you commit to a collegiate athletic program, you must commit for 4 years, or 5 if you're redshirted. If the student-athlete does get enough credits to graduate before then, they can leave early, but not before. Agents of sporting gear and uniforms should not be allowed to have access to any amateur athlete, period. The universities should make this rule on their own. If Kansas wants to buy Adidas that should be the end of the relationship between the university and Adidas. Once Kansas gives Adidas the money, the only contact should be regarding customer service issues regarding defective gear. Same goes for other brands of gear in other sports in the athletic department.

There are other things about athletics that help these players become better people overall as well. They develop skills that they would not get. Time management, work ethics, teamwork, and lessons in humility. This is a big deal for a lot of people coming out of college, not just today, but in the past and going into the future. College athletics should be used as a minor league for the NBA, NFL, MLB, etc. You either graduate, or you don't get a scholarship to play.

This is open for discussion, but simply banning college athletics would be a disservice for athletes and non-athletes alike in college. This applies to current students and alumni. There is a thing called school spirit. You won't have that without college athletics. The pros can develop the players on their dime, but not on the university's dime. But if they do that, then they have to recruit the players right ouf of high school and don't put the burden on the universities. This would make college athletics at the highest level more competitive and would ensure that the best teams have the best chances of winning because that experience plus the talent goes much further than going on raw talent alone. Experienced players on one team who aren't as athletically gifted can beat a team with superior athletic abilities but less than one season of experience. It would also teach the students that loyalty is a good thing, and it helps build chemistry.

I still want to know what steps are being taken regarding Nike's involvement with AAU teams where their top players more often than not end up at Nike sponsored schools like duke, KY, etc., It's not just Adidas

Of course it isn't just Adidas. Under Armour and Nike, among others, are probably doing the same thing.

"We have to do things right going forward"