The final day of the Kansas Relays featured a KU newcomer breaking an old record.

For his efforts, Bradford was named Male Performer of the Meet, giving the Jayhawks the honor for the second year in a row.

Bradford’s mark, which also set a facility record, was the second best in NCAA competition and the fourth best mark in the world so far this season.

"He is just an awesome athlete, and one thing that great athletes do is they find a way to compete,” Kansas coach Stanley Redwine said of Bradford. “The exciting part is that he didn't think he would break the school record this year, but he did it, so now we get to see where he goes from here."

While Bradford was doing exciting things for a new batch of Jayhawks, a few former Jayhawks were back at their old stomping grounds drinking in some nostalgia.

One such runner was former national champion Sharon Lokedi, whose uniform on Saturday still read “Kansas,” but came with a very different vibe than the one she had been used to during the past several years. 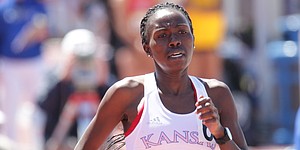 “I’m just like, ‘This is so different,’” Lokedi said. “I wish there (were) many more races to run here, but this was just a special one.”

Lokedi, who now is pursuing a career as a professional runner after exhausting her outdoor track eligibility at KU, ran the fastest time in the 1,500-meter run on Saturday at 4:24 in her first race as an alumna at the Kansas Relays.

After winning a national championship in the 10,000-meter run and competing at nationals in the 5,000-meter run last May, Lokedi decided to run in the 1,500 meter-run in preparation for an upcoming race.

“The biggest part of my life is here,” Lokedi said. “I’ve learned a lot, and there’s a lot of people I’ve never met. I have amazing fans and I enjoy being here. I am never going to forget everything I did here, the opportunities that I got and the life that it shaped me to be who I am.”

“We’re all still training together,” Lokedi said. “I do everything just the same. I haven’t changed anything. I just feel normal.”

As Lokedi crossed the finish line, another reigning national champion was getting ready to race. Competing in two events on Saturday, junior Bryce Hoppel cruised to a pair of wins with a time of 3:48 in the 1,500 and 1:49.1 in the 800.

Hoppel’s victories pushed his winning streak to 12 in a row in both races. The last time he failed to win a race individually was at the 2018 NCAA Outdoor Championships.

“It kind of pushes me more to keep competing and running faster,” Hoppel said. “I never really save anything in the races that I am in, I just kind of compete as hard as I can in each one I am in.

Kansas will travel to compete in the National Relay Championships at the University of Arkansas next weekend.

The Relay's record in the Scott Huffman Pole Vault is:

Just for fun, the indoor record was just set by Zach's teammate:

Pole vaulting has to be the most difficult track and field event there is. To have the speed, strength, agility, coordination and perhaps above all else, courage to bend that pole, turn your body upside down and propel yourself skyward over the bar. Amazing! Congratulations Mr. Bradford.

Congrats, Zach!
You made the Jayhawk Nation all over the world proud!
BTW, can he play basketball, too? We have player and recruitment attrition in our Men's bball program... just FYI.