Kansas City, Mo. — The play call was simple enough, and it wound up saving Kansas during a 63-60, grind-it-out victory over New Mexico State on Saturday night.

“Five side” is the name of the inbounds play underneath the basket, and it is designed to get junior forward Dedric Lawson a shot in the paint.

With a guard in each corner, Lawson on the block away from the ball and KU forward Mitch Lightfoot standing across from him, Lawson ducked in behind Lightfoot’s flash to the high post and caught the ball with nothing but space around him.

The easy hook pulled Kansas within 5 and sparked a spectacular finish from Lawson, who exploded from there to score KU’s final 14 points en route to his fifth double-double (20 points, 10 rebounds) of the season. 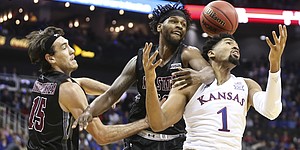 View a gallery of images from Saturday night's game between the Jayhawks and Aggies at Sprint Center.

“I’m not in their locker room, I don’t coach their team, so I have no idea what they did to motivate him,” NMSU coach Chris Jans said after his team’s gut-wrenching loss. “But he certainly was a different player in the second half and was a huge reason they won the game.”

After the game, Lawson credited the inbounds play for getting him going, but said “just seeing the ball go through the net” was more important than anything specific about the action.

“I think I was just being more aggressive,” Lawson said of a second half that featured 18 points on 7-of-9 shooting from the floor. “I got some easy baskets and putback things to get me going. It’s just basketball. It’s all about getting into a rhythm. After that, the basketball just takes over from there.”

Lawson’s soft hook was followed by a 3-pointer from senior guard Lagerald Vick that brought some energy into the building and pulled the Jayhawks within 2 with 8:51 to play. Lawson assisted on the shot and then took over from there. 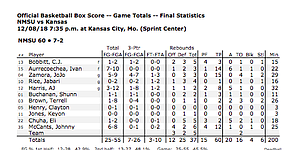 The next 14 points were all his — four layups, three free throws and a 3-pointer, just his second of the season. The Memphis transfer with good range is now 2 of 13 on the year from 3-point range. And that second make came with Saturday’s game knotted at 57.

Kansas never again trailed after taking the 60-57 lead, and the Jayhawks walked away victorious, perhaps feeling a bit lucky, when a 3-pointer to tie it from NMSU’s JoJo Zamora missed the mark.

“I thought they were a better team than us tonight,” Self said. “And we were very fortunate to win.”

Early on, it looked as if the Jayhawks would travel down a much different path to reach their desired destination.

After sprinting out to a 12-2 lead during the game’s opening minutes — a start that, for the second game in a row, did not include Vick in the lineup — second-ranked Kansas struggled to find that rhythm that Lawson spoke of until the stretch run.

Players of all shapes and sizes made mistakes or suffered mental lapses that allowed New Mexico State (7-2) to gain confidence and play with the upper hand. The Jayhawks (8-0) led for less than half of Saturday’s contest and might not even have been that fortunate if not for Lawson’s big finish and Lightfoot keeping them alive.

Sure, a handful of other Kansas players had key shots or memorable moments that helped save the Jayhawks, but few came from the same kind of effort and competitive energy that Lightfoot brought to the table during his 18 minutes that produced 7 points, six rebounds and a few key momentum swings.

“Mitch played great tonight,” Lawson said after the win. “If it wasn’t for Mitch, we probably lose that game. He had big charges, a couple stops down the stretch, things like that. So I think Mitch was the player of the game for us.”

“Mitch has been around two years,” Lawson continued. “He played with Devonte’ (Graham), played with Frank (Mason), even guys like (Landen Lucas); he learned from him when he was a freshman. You’ve got to give credit to Mitch. He’s a guy who sticks around and is ready when his number’s called. That’s a great teammate. Everyone needs a Mitch Lightfoot on their team.”

Self saw Lightfoot’s night from a slightly different perspective. And, remember, this is a coach who rarely looks at total points as the defining factor in whether one of his players played well or not.

Lightfoot’s energy was up and his effort was good. His charges and momentum dunks provided a big lift, as well.

But, as Self pointed out, he still allowed his man to score too easily in the post and was one of those Jayhawks who allowed a mental lapse to hurt the team.

The Jayhawks may have survived it, but Self was in no mood to celebrate it after the victory.

“I thought he did OK,” Self said of Lightfoot. “Hey guys, there’s not too many giddy things to say period. About coaching. About anything. We’re not very good right now. We played one good half against Wofford and other than that we haven’t been worth a flip.”

Lawson was down the stretch — much like Vick was to close out the Stanford game — and Kansas moves on as one of college basketball’s remaining unbeatens.

So, yeah; Self and the Jayhawks will take it. But the key to this team getting better than they were Saturday night against New Mexico State is in the collective act of individual improvement. That goes for Lawson, too.

“I guess when you play enough and shoot enough, the law of percentages will prevail,” Self joked of Lawson’s 8-of-15 shooting effort in 31 minutes. “He made some good plays late. But it’s hard to get too excited when, other than (against) Vermont, that’s about as poor as he can play.

“Whatever he did to flip it, we need to bottle that and get him giving that right from the get-go,” Self added. “He can certainly play a lot better. He knows that. But he did make some key plays late. We don’t win the game without him doing that.”

Kansas is off next week and will return to action Saturday, when Villanova comes to Allen Fieldhouse for a highly anticipated rematch of last season’s Final Four clash.

Coach Self after KU’s win over NMSU by KUsports.com

I'm glad Dedric redeemed his weak D, abused by Ivan, we got the last laugh.

Coach ain't happy. "Lagerald had a bad Thursday." What does that mean? Why does it feel like Lagerald has a hard time dealing with prosperity and is slipping backward again? Does he pout, or sulk? The young man is an enigma. Does this team have a leader? It may be a freshman in Devon. Dedric? Maybe. Coach is already coaching for next Saturday and you can't tell me how bad he wants this one. He wants it bad.

I think we all almost feel a loss will come, sooner rather than later. This is certainly not an overpowering team, at least so far. We just can't seem to put two strong half's together. Our free throwing shooting sucks. But I will take the 8-0

Yikes! Schooled in the paint by a juco transfer from Iowa.

This team is obviously overrated by a lot. They are no where near the hype to this point.
They look often look lost. Grimes is M I A.

The Jayhawks may have survived it, but Self was in no mood to celebrate it after the victory.

Errr.. might as well celebrate every win from now on. We will fight, survive, and move on. With the team that only counts on not-so-athletic Dedric, no consistent 3pts, so-so D, 4-guards play that looks promising... but not so effective if we go back to high-low, weave and weave (Jesse, I had to disagree on this one), poor asst/TO..

Go to Dedric every time, you think other coaches are fool? Lucky we got so many second-chances. Guards don't fake, always in a hurry to drive, we'll be lucky if they kick out to the hot 3pt hands.. It's time to push the panic button.. the sky is falling...fast.

This team likes to dribble the ball far too long and not enough crisp passes to work the ball to an open shot.

Duke beat Kentucky
Duke jumped us we dropped to 2
Gonzaga beat number 1 Duke
Gonzaga jumped us
We beat Tennesee
Tennesee beat Gonzaga
So that means Duke will jump us again .

That would be funny if it plays out that way. Depends on whether voters vote on wins and losses or on the eye test.

I noticed that Texas lost to VCU this weekend and Rick Barnes has a legitimate top 10 team with Tennessee.

D. Lawson gets it and it's too bad that HC Self was in such a bad mood to not acknowledge that fact that Lightfoot changed the game and through sheer will forced the Hawks to play with energy and urgency. Obvious Player of the Game

Lightfoot brought the energy that got both the team and the crowd back in the game but it was Lawson who carried this team. I don't really care who was the player of the game, just glad Lawson and Lightfoot finished strong.

Anytime we win at the Sprint Center, I'm happy.

One excuse that doesn't work: this team needs more time playing together than past teams. The Lawson brothers and Charlie Moore have been here for at least 1.5 years and although not playing in games, they've had more than enough time playing together. I'm not a recruiting insider but I'm willing to bet that Self had these three players practicing together with players who were planning to come back to Kansas.

What this team does need is a bona fide leader. There are several candidates, all of which, seem to have better things to do. Fine, give the captain's role to an underclassman.