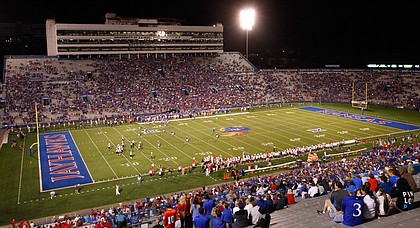 Kansas City, Mo. — During a meet-and-greet event for the Kansas football team Wednesday, KU athletic director Sheahon Zenger delivered news that renovation of Memorial Stadium and other football-related projects totaling $300 million are around the corner.

Zenger said architects will complete their renderings of the stadium’s renovation in three weeks, and the final version is expected to be released to the public in September.

“I’m going to say this quick and then be done with it. In three weeks, we will have the renderings for a new stadium,” Zenger said to a large crowd with KU head football coach David Beaty and incoming chancellor Douglas Girod in attendance at The Well Bar. “The numbers will approach around $300 million dollars.”

Along with renovations to the stadium, Zenger announced plans for an indoor football facility that the team can practice in.

Zenger, who recently had his contract extended until 2021, wants pieces of the renovation that can benefit the team’s on-field performance to be completed first.

“This is a special, special time to be here,” Zenger added.

Beaty said the indoor practice facility will be crucial for the Jayhawks to keep up with rival programs in their ongoing “facility war.”

“I think it will be something that will be just that next step in transcending our program to the next level,” Beaty said of the indoor facility. “We really do have to keep up with the facility war that goes on out there. Dr. Z gets that. Our chancellor Girod, I know that he gets that and obviously (outgoing) chancellor Bernadette Gray-Little was so phenomenal in giving us all the pieces that we needed.”

The Jayhawks finished with a 2-10 record last season, but Zenger told the crowd, "We're doing it because we have the leadership of this coach right here," signaling to Beaty.

“It’s exciting for me because it’s a great time to be at KU,” Beaty said. “I mean (Zenger) has done so much here. For him to clear the deck and kind of make room for football right now, and he’s a football guy at heart, knowing our fans deserve a really nice stadium.

"It’s a fan experience nowadays, and we want these people to be comfortable and really enjoy their time there."

Renovating it isn't enough. This joint needs to be torn down and replaced with a completely brand-new stadium. The money spent on Rock Chalk Park should have been spent on a new football stadium.

Well, I was with you until the last sentence. Rock Chalk Park was necessary to have a reasonable track facility. It, in fact, cleared the way for meaningful work to be done on the football stadium. But, yeah, Memorial needs to be replaced.

There's really no comparison between the cost of Rock Chalk Park and the stadium renovation. Rock Chalk Park came in around $25M, the city paid for it and KU is leasing it. After 20 years or so, KU will own it.

Building Rock Chalk Park let us take the track out of Memorial so we could truly start the process for renovation.

I'm 100% on board with renovation. I don't know where we'd put a new stadium, and I don't think there's a better place than the current location. With the momentum we have going now I don't like the idea of a rip and replace on the same site. I'd hate to see us disrupt that by playing at an alternate site for a year or 2.

If the season ticket prices go up, so be it. I'm good with that. It's not the price of tickets that is leading to empty seats.

Gambling that David Beaty wins four games this year and has a job in 2018.

Renovation is better than nothing. I'll be curious to see what they plan to do and how much season tickets will go up. Either way it's great news for KU Football.

Renovation, if done right, can be great. Why tear down the stadium? I don't mean that question to be rhetorical. I don't understand why some of us have been so opposed to renovation or the new/updated stadium being where it is. Look at Soldier Field or Lambeau as examples of how organizations have honored historic buildings while also making them new again. Memorial is a historical structure in an beautiful setting for college football. I'm eager to see the renderings.

You can also look south on Naismith drive and see a stellar example of a renovation. It's an old limestone barn where excellence takes place every fall and spring. And $300 MM is serious cash. It will look great when finished.

Two-sitysix gets you this, not bad, what does 3-hundai large get ya?

Just to give everyone an idea of how much 300 million is and what it can do. A lot.

Great find. It would also allow KU to still claim the oldest stadium west of the Mississippi.

Glad to hear this long overdue news! Look forward to the design reveal. By the time all of this is done, I would venture a guess the price tag will be closer to 400 million. No point in cutting corners or compromising due to cost. Do it big and do it right!

This was the only thing missing as far as competing with other Big 12 schools in recruiting. We have great facilities and locker rooms and all that, but the stadium is an eye-sore. Texas high schools have nicer stadiums than ours. Now if they can just get liquor sales started in conjunction with the opening of the stadium, we'll be all set.

Not going to quibble with new vs. renovated. I'm sure that they crunched all the numbers and looked at the possibilities. In fact, the donors who are going to end up paying for it probably has as much say as anyone on that decision. Fair is fair. My meager Williams Fund donations aren't going to pay for it.

We have the best setting in college football - I've heard this said many times by many people (not just homers), so why not build on your strength? A new stadium means moving home games to Arrowhead for probably three years. This could destroy a program. Sporting Park is just too small.

The other options are to build on the Shenk Complex or on West Campus near Kasold. Shank would be a good site, but Im guessing the powers that be either don't want it there or, the footprint doesn't work. West Campus would be a terrible location with no supporting retail or entertainment options.

Renovate the old stadium and she should last a long, long time.

I agree with most of the later posts. $30MM would be a "nice" renovation. $300MM should transform the stadium to look brand new without loosing its best feature - its location.

It will be interesting to see how they intend to pay for this huge renovation. The athletic department has current assets (as of their 2016 financial statement) of about $48.5MM and long term debt of $36MM. That leaves a whole lot of fundraising to do.

If the new stadium changes the facade to more limestone and compliments Allen Field House, then I think the renovation would be worthwhile. Initially, I was all about bulldozing memorial stadium to the ground and starting over with an elite, state of the art facility. Now I can see that 300 million would do essentially the same thing while allowing the team to still play in the same location during construction.

This is where Dr. Z earns that contract extension.

Memorial Stadium was built as a memorial to Kansans who died in World War I. Of course, to younger Jayhawks who aren't veterans and who will never spend Day One in the US military, this dedication means nothing to them. KU doesn't need a 100,000 plus seat football stadium like Texas, so a renovation will do just fine.

I agree with you about remembering this is a memorial to KU war dead from WWI and maintaining that. Renovation doesn't have mean expansion, let's focus on improvement. I'd even be for dropping capacity some. I think that's what Baylor did with its new stadium (compared to capacity at its previous stadium). the optics are better (fuller house) - and bring the fans closer to the field and the action.

John, I don't think service-shaming is the way to go. No need to slam those who decided to live their lives another way.

I've always felt that the stadium should include something more specific and visible to honor veterans than simply the name. Perhaps something like this could be included in the renovation even if the stadium is renamed. Maybe even a statue or two of KU athletes who also served?

Wait until fans start filling the stadium and then start renovating. A lot of money has been spent already with little improvement in attendance.

I disagree with you. I think now is as good a time as any to renovate the stadium. Beaty has rekindled promise in the program with great recruiting, more experience and depth, enthusiasm, his hiring of Tony Hull and Doug Meacham, and the renovation of the locker room. Yes, it seems nuts that we'd spend $300 million on a stadium for a team that can hardly win and for fans that hardly show up. But 1.) this will bring out those curious people that may not normally go to a game just to check it out, 2.) with the promise Beaty has instilled in the program we will start winning some games and attract even more fans, 3.) it pumps up the players and will get them even more excited to play on Saturday's, 4.) we'll bring in better recruits because the stadium will have much more to desire, and 5.) with a new renovated stadium will come more national exposure. And if we can start to win with that little bit of extra exposure it'll help that much more.

One of the first things that helped propel Louisville football was a new stadium.

Let's see some of those Brownback LLC credits being converted to tax write-offs for stadium contribution charity donations!