One Kansas University track and field athlete has earned a trip to the Rio Olympics, while others still have a chance.

Levy, the Jamaican record holder in the hammer and weight throws, threw 61.48 meters (210 feet, 6 inches) to beat the rest of the field by more than 22 feet.

Two other Jayhawks competed in Kingston over the weekend. Junior Strymar Livingston placed third in the 800 meters in a career-best 1:47.93, and freshman Ivan Henry took 28th in the prelims of the 400 in 47.50. 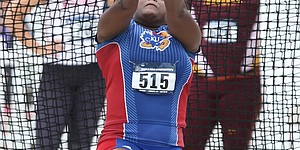 Kansas University's Daina Levy spins through her rotation during an attempt in the Women's Hammer ...

Meanwhile in Eugene, Ore., at the U.S. Olympic Trials, KU product Kyle Clemons advanced to the finals of the 400; Jordan Scott reached the pole-vault finals; and Jessica Maroszek placed eighth in the discus.