A drop-off in the Jayhawks’ activity first reared its head on offense, when OSU switched to a 2-3 zone, but it got worse on a key possession in the final minute, on the way to a 65-57 KU loss.

The Jayhawks led by as many as 15 points midway through the first half. But by the final minute of the game, they trailed OSU (14-8 overall, 4-7 Big 12) by three. That’s when LaShawn Jones, who scored 12 points and had nine rebounds off the bench, missed a layup, gathered the ball off the floor as the Jayhawks watched and put it through the net to give the visitors a two-possession cushion, 61-56, with 33 seconds to play. 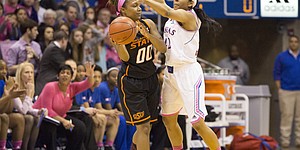 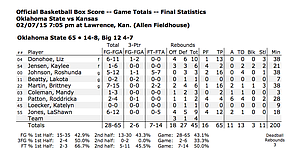 The sequence, indicative of both OSU’s 45-31 rebounding advantage and its 40-26 lead in points in the paint, left Henrickson peeved.

From there, KU senior Asia Boyd missed a three-pointer. and OSU’s Roshunda Johnson hit a pair of free throws with 17 seconds remaining to push the lead to seven.

Said Boyd: “I thought the ball was out of bounds.”

Kansas freshman point guard Lauren Aldridge saw the play from nearby, on the baseline.

“I think everybody was kind of at a standstill for a minute, and then they were like, ‘Oh, the ball’s still in play.’ It was kind of a weird ordeal,” Aldridge said following her 14-point, five-assist night. “That’s partly on us, too, though.”

But KU had plenty more issues, especially late. Kansas had 13 turnovers, six in a five-minute span of the second half.

“We can’t score if we don’t get shots,” Henrickson said. “Then we don’t score.”

Indeed, Kansas went ice-cold late as its struggled to solve the Oklahoma State 2-3 zone. The Jayhawks, within one point of OSU with 2:57 to play, missed their final eight shot attempts and only converted one of their last 11.

Between OSU’s balance — 16 points apiece from Brittney Martin and Roshunda Johnson, 13 from Liz Donohoe and 12 from Jones — and KU getting nothing late, the Jayhawks dropped to 13-11 overall and 4-7 in the Big 12.

Boyd said most of KU’s miscues were self-inflicted.

“It was on us. I think if we could’ve held our composure a little bit better and, I don’t know, made some shots at the end … ” the senior said. “We’ll learn for the next one.”

Henrickson, who saw her team build a 23-8 lead against man-to-man defense in the first half, couldn’t believe KU’s mishandling of the zone once OSU switched things up.

“At some point,” the coach said, “somebody’s gotta knock down a shot or get an offensive rebound.”

KU only secured three offensive rebounds in the second half on 18 misses.

“You can’t stand and watch,” Henrickson added. “There’s gotta be a second effort to offensive rebound, and we certainly didn’t have that.”

4 and 7, and 13 and 11 with our 2 leading scorers, Gardner and Knight being seniors. Please point out to me, if you can, how our program has improved in the last 2 years. Once again headed for a losing record in the conference and another bottom half of the Big 12 finish. Same old same old.