KU stacked at running back

Before the season, Kansas University running back Clark Green might have been as well known for his quiet nature in postgame interviews as he was for the stylish braids he sported in his hair.

Green not only showed up to KU's media day with his patented cornrows clipped in favor of a buzz cut but also presented a more vocal personality.

One reporter thanked Green after an interview but accidentally called him Gary, confusing Clark with freshman running back Gary Green II.

"I'm Clark, man," said Green, whose voice might have grown louder, but he still flashed a warm smile.

Truth be told, even without either of the Greens in the backfield, a plethora of Jayhawk runners could have Kansas fans scratching their heads wondering who's who in the KU backfield this fall.

"We don't have enough footballs for the running backs that we have," Kansas coach Mark Mangino joked.

Considering Clark Green's performance during his two first seasons in Lawrence were as steady as his personality, it would be hard for Mangino to remove him from the field.

Green ran for 813 yards in 12 games as a red-shirt freshman.

"Clark Green is having an outstanding training camp," Mangino said of the junior, who also was third on the team in receptions last year with 44. That broke the KU single-season record for receptions by a running back that Green had set a year earlier when he caught 37 passes.

"I think Clark Green is a person that outside of our program maybe has been taken for granted a little bit," Mangino said. "He put up some great numbers last year, yet we spelled him sometimes with John Randle."

Indeed Mangino did, but only because Randle, a 6-0, 185-pound Wichita native, also earned honorable mention honors for the 503 yards he rushed for on 88 carries (5.7 yards a carry) during his freshman campaign.

"John Randle is having a very good camp," Mangino said. "He is more explosive than he has been at any point." 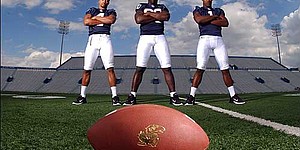 Yet Mangino insists his depth at the position doesn't stop with those two talents. Instead a pack of backs (Jon Cornish, Austine Nwabuisi and Green II) also could work their way into a significant role.

"Jon Cornish has been an improved player for us and really started to be a guy we can trust and get some playing time," Mangino said, of the 6-0, 205-pound sophomore from New Westminster, British Columbia.

Mangino revealed last week that he might red-shirt Green II because he missed "a long period of time" during training camp because of an unspecified illness.

"I think that is something we have to consider," Mangino said of holding out the 5-9, 175-pound speedster from San Antonio. "But we want to see him more in practice before we can discuss that issue."

The stout 6-0, 235-pounder from Houston clearly seemed to be ahead of Lawrence's Brandon McAnderson (6-0, 235) on the depth chart at fullback.

While Nwabuisi carried the ball only five times last season, he recorded both a rushing and receiving score in KU's 42-35 win over Wyoming. 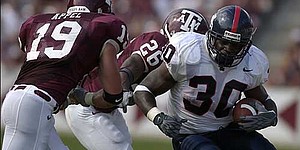 "It just so happened that that formation and personnel group we put on the field allowed us to do certain things, and he stepped up and we got him the ball."

Because of the coaching staff's commitment to personalize the playbook, Randle said that only can maximize the offense's potential.

"Whoever does the best is going to get it," Randle said. "There's a lot of competition back there, but we're all our brothers."

But as of right now, it still seems Clark Green -- outspoken or shy -- will play the biggest role in the backfield.

"Clark is just a guy who gets the job done, everybody knows that he's not flashy," Quartaro said.

"He can run the ball between the tackles, he's gotten better mobility outside, and obviously he can catch the ball. Also he's a very good blocker, very tough, very hard-nosed."

Perhaps even a shade speedier because of his shaved scalp?

"I told him he's faster now without that hair," Quartaro quipped.